Memories are such funny things.  They have the power to make you laugh, cry, ache, rejoice. And the really crazy ones can do all of the above.

Facebook has this app that will show you what you posted on this day in the past.  Let's just say November 6th has had some "interesting" times.

Six years ago, I knew I was pregnant, and in my gut, I felt something was "up."  I didn't know what it was yet, but I knew I felt a lot sicker a lot sooner than usual.  I was on my way to my niece's wedding with one of my girls.

Five years ago today was the day we tried to extubate following his g-tube/nissen surgery the day before.  Didn't go so well.  In fact, downright bad.


Here's an example of what I wrote that day:


Running a fever now. Hoping to extubate and move to high-flow this afternoon, but Dr wants to talk to the ENT first. Hoping it goes well, because if they have to re-intubate they'll probably go straight to a trach. Really don't want to deal with that. Any words of comfort/wisdom from those who have trachs? I know it's not the end of the world, but I'm still worried.


Extubation didn't work. He tried so hard, but it wasn't pretty. His sats stayed up but he was working so hard & got so tired. CO2 was over 130, normal 35-45 & his ph balance slipped a lot. Then he started bradycardia. Never done that before. This was all within 15 min. So I guess the next mountain to climb is a trach. It's scheduled for next Tues. Two steps forward. One step back.

And so many prayers were offered on his behalf, and mine.  So much welcome advice and comfort from other trach moms.  I recently learned (like a few weeks ago!) that when CO2 levels reach as high as they did, and blood levels are acidic as they were, often patients don't recover, ever.  Glad I didn't know that then.   Sometimes ignorance really is bliss. 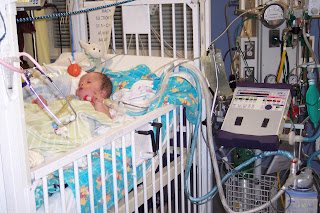 Four years ago found us back in the PICU, just across the unit from where we'd been the year before.  We'd also been there a few times in between those two stays.  But this time we were on the downhill side of our stay.  He had rhino (of course) but we also discovered that he had asthma as well.  That's also when I found out that the year before there were some measures put in place to act very quickly if he crashed had.  I had suspected, but not been emotionally able to ask about them. 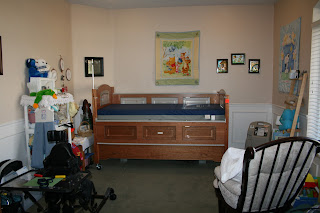 Three years ago was a good time.  We were getting ready for his Sleepsafe bed.  That's the really awesome bed that will fit him forever, that goes up and down, raises and lowers his head and feet. and lets him turn sideways to sleep in the trough created when his legs and head are raised. Exactly what he's doing right now. Silly boy. 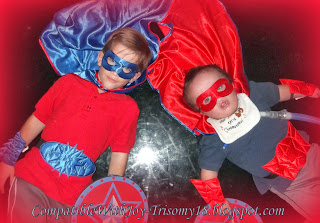 Two years ago we were enjoying a rest, an in between time where we were at home.  But he'd just gotten home from the hospital a couple days earlier, and although we didn't know it, we were going to be headed back in right before Thanksgiving.  So I guess it was our eye of the storm, right before the wind started howling again. 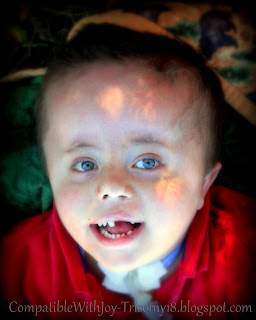 Last year, well last year we did manage to avoid the hospital, but he did seem to think he needed to pull out the tricks again.  He had a bad asthma attack at school.  I went down to pick him up when he wasn't really responding to treatment, and he decided to "throw a plug" just after I got there.  He had a big ol' sticky bunch of mucus plugging off his trach, making it impossible to breathe.  Not hard, impossible.  So we did an emergency trach change on his classroom floor.  Fun times.  And what were they studying that day?  The letter B.  Yeah, B for breathing.  His nurse and I thought that was pretty funny.  Really, once it was all over, we did. 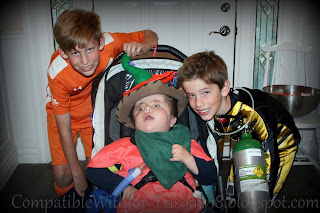 This year, well today has been pretty quiet.  He's still struggling with that darn ear infection.  We did the vinegar rinse for another week, and the drainage came back about 48 hours after we stopped.  Plastics has scheduled him for his upper gum repair the end of January, so we're probably looking at doing two separate procedures.  I don't think his poor ear can wait that long.  Something we'll talk about on Wednesday when we see several doctors at the same time.

But he went to school today and had a great time.  He was off the vent the whole time and for a few hours after he got back home.  He's using it now for a late afternoon nap but we'll turn it off once he wakes up.  He knows his colors and emphatically chose his Superman shirt this morning over his Awesome one.  Yesterday he enjoyed beating a bongo drum and was very excited about using the clapper for "Up on the Housetop" that they're preparing for a Christmas concert.

Yeah, our little man loves his life.  He's fought hard to have it, and we're so grateful for all who have taught us how to care for him.  Looking back, it's so easy to see the blessings, the tender mercies that have come with having him part of our lives.

A memory is what is left when something happens
and does not completely unhappen.
~Edward de Bono

Posted by CompatibleWithJoy at 6:30 PM