I Think We Have a Winner! 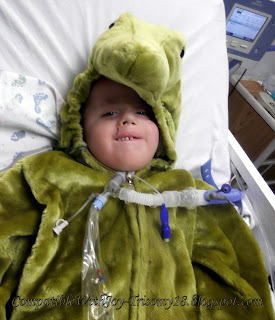 It looks like asthma is the winner here!  Yeah, I know, not something most people are excited about.  But if your choice is between influenza and the plague, you take influenza.  Ours is between pulmonary hypertension (a known killer without a lot of treatment options) and asthma (also nothing to take lightly, but with a lot of options).  Yep, I'm pretty happy now.

We thought we were seeing some improvement yesterday with the albuterol treatments.  But they added in an oral steroid yesterday, thinking that if it was inflammation in the lungs, it would show pretty quick.  And it has, big time!  He's been sitting in the high 90's on one and a half liters of oxygen most of the day.  I can't say how thrilled I am with this!  He hasn't done this well in a long, long time.  And like I keep saying, when he breathes better, so do I.  I feel like we've been given a new lease on life. 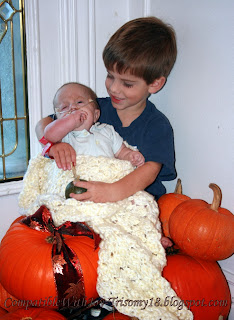 And because it's Halloween, here's a look through the past few years.  His first year, he was dying, and we didn't even know it.  Plus, if I remember right, it was raining.  Nope, no trick-or-treating for him. 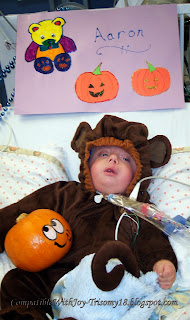 His second year was when he was first diagnosed with the asthma.  He was in the PICU and wore a really cute monkey costume, for about five minutes.  Then it was back to business as we tried and tried to figure out what was going on, 'cause we were still three days away from diagnosis. 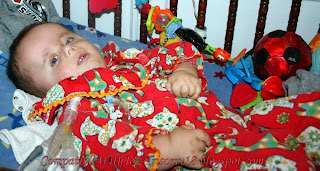 Last year, Aaron got to wear the costume that all his siblings wore, the one I didn't even let myself think about before.  AND he went trick-or-treating.  Fun times. 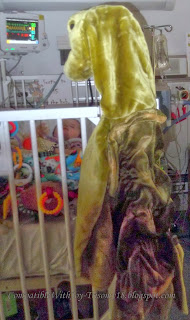 This year, well, he's back in the hospital.  We can't decide if this is a dinosaur or a turtle costume.  The back kinda has a shell-like thing.  Anyway, it's super cute.  He grinned when he saw it.  And if every other year in the hospital is what we have to do, well, that means that he's still around.  So I'll take that.


When life gives you a hundred reasons to cry, show life that you have a thousand reasons to smile.
~Author Unknown


Posted by CompatibleWithJoy at 5:26 PM