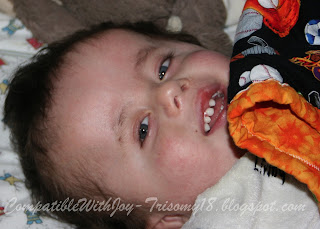 Okay, so it's been waaaay too long since I've written, and I can feel it in my brain.  It's all kind of jumbled up right now.  Not sure I can even try to straighten it out.  But you were warned when we got home that life in May is just crazy around here.  Just this past week we've had four concerts/performances, four baseball games, soccer meetings, a scout camp out this weekend, three play practices (for three different people in the family!) and the list goes on.  I've also returned to work, because I didn't have enough to keep me busy.

I stopped to count the trips I made on Thursday, and it was insane!  6:00 a.m. drop off to the high school for an early morning class, 6:45 drop off to the Jr high for an early morning class.  8:00 a.m. Jr high car pool and then drop off grade schoolers because there was a project due that wouldn't have survived the bus ride.  9:00 a.m. end of year testing at district headquarters for my homeschool 7th grader.  10:30, take same 7th grader over to the Jr high because he's also enrolled there and really should have been in class that day.  3:00 p.m. pick up Jr high car pool.  4:30, run over to some soccer fields for a tryout.  5:30, trip to the grade school for the 1st grade performance, dropping off one at the Jr high on the way.  Run home quickly afterwards at 6:45 because Aaron is pulling tricks on his nurse and she needs some back-up.  Back to the Jr. high for band concert, and then, drop kids at home at 8:30 and head out to a soccer team meeting.  9:15,finally, home again.  And of course, because Fate was laughing at me, I had a huge load of work from the office. Yeah, it's not always that crazy, but sometimes....

And Aaron?  He's been doing great.  He had some bumps after coming home, but nothing that couldn't be managed.  He did well enough that a week ago Wednesday, I dropped his vent settings a little bit.  We're trying to lower his PEEP very gradually.  It will make it easier for him to come off the vent if it's already not providing as much support.  He wasn't real sure about it.  In fact, on Monday evening I was almost ready to increase it again.  But by Tuesday, he was thinking it was all okay after all.

He hasn't been real thrilled with the cold front that came through yesterday, though.  Our AC has decided to go on strike, and there's no sign of it coming to a compromise.  So we've been opening the windows to try to cool things off.  Aaron doesn't do real well with a lot of heat.  But apparently (I think) he didn't appreciate the wind that kicked up yesterday either.  This morning he started struggling again, quite a bit.  I personally have no experience with asthma, but I've known others who struggle with the dust and pollens in the air.  But this kid?  He's on a closed, FILTERED circuit, for Pete's sake!  I wouldn't think it would really make a difference.  He, on the other hand, disagrees.  Whatever.  But after a breathing treatment, he's done great the rest of the day.  I'll just have to be very careful about wind and dust and timing of having the windows open.

On another note, he's been a bit sadder recently.  And he's acted like his tummy was uncomfortable.  And I've noticed that it's often right before a feeding.  Yeah, I've heard that people with feeding tubes don't get hungry.  Again, don't tell Aaron what's "supposed to be."  I sat down and figured out his calorie intake against his weight.  I think he was hungry.  I don't know about you, but I NEVER get grumpy when I'm hungry.  (And it's a good thing my family here doesn't read my blog or I might get called out as a liar.)  Anyway, I increased his calories yesterday (because I didn't have enough to do with all my running around) and he's been much happier today!  Even with being warm.  Poor kid.  He thought he was being starved to death.  Sorry!

Anyway, we're less than one month from Aaron's 3rd Birthday!!!  How awesome is that??  Because Dad and big kids will be busy running a Cub Scout Day Camp on his birthday (the 13th) we're going to celebrate on the 15th.  Mark your calendars and join us if you can.

If you want something done, ask a busy person to do it.
The more things you do, the more you can do.
Lucille Ball
Posted by CompatibleWithJoy at 10:50 PM