I know I try to be upbeat and all.  And usually I succeed.  But sometimes, things just get to me.  And then I hide, and I grump.  And most of the time, they're not even that big in the grand scheme of things.  It's the little things, like the pebble in the shoe, that really get me.  It's those unmet expectations that throw me.

I mean, there's SO MUCH that is unknown in my life right now, and has been.  Aaron has proved time and again that he can turn on a dime.  I've told the kids for a long time now that the vacation to Arizona at the end of the summer (yeah, end of summer sounds like a good time to visit the Phoenix Valley, right?) will not be a reality until we pull out.  If it doesn't happen, well, we'll just go on.  We just roll with those things.  Things like broken bones, stitches, pneumonia (sort of roll with that one) and those biggie type things.

But it's the little things, the ones that shouldn't really matter, that bug me, and then it bugs me that I'm bugged.  I know, makes a lot of sense, doesn't it.  Like last Sunday when we got to church and couldn't sit together as a family.  See, there's really only one bench in the chapel where we don't block too much aisle and Aaron is fairly separated from the rest.  And we always try to sit there, but if we don't get there fairly early, sometimes there are others sitting there.  And there isn't any handicap seating designation either, anywhere in the chapel.  So last Sunday, there was room for one parent and one child to sit there with Aaron.  And the rest had to sit somewhere else.  Now, honestly, it was a more peaceful Sunday meeting than usual.  Fewer eeking at siblings and all, with them spread out that way.  BUT it wasn't what I was expecting. 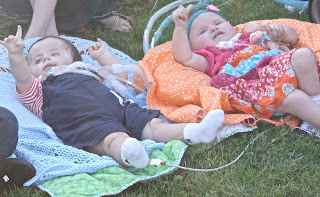 It's kind of like going out to start the car, and it not cooperating.  You just expect it to happen.  Like going to the freezer for your favorite ice cream, that was there the day before, and finding that someone else found it first.  Or planning on going somewhere and finding that there's no one to mind the baby because someone else has had something come up.

Last year, I think it was a full year ago, my DME (durable medical equipment) company changed Aaron's ventilator water.  Same amount of water, same safety, but different bags.  And I DID NOT LIKE IT.  My cupboard where I store it wouldn't quite fit it in the right way anymore.  It ruined several days, until Aaron woke me up to what was really important with another trip to the hospital.  Did I mention that it's the little things that get to me?

So last Sunday, I spent most of the day trying to work through my feelings.  Because I was having a rotten day, and it really was all my fault.  It was my fault I couldn't see past my own idea of "how it should be" and I let it spoil things for me.  And my poor husband could tell I was not a happy camper, and can I tell you, he was so relieved to find out he wasn't the reason for it.  Poor guy.

So what I need to do is figure out how to keep it from happening again, as best I can.  The bishop said he'd talk to the young men who usher and ask them to explain to anyone who sits there that the pew is needed for Aaron.  And I'm going to try to find some handicap signs that he said we could put up on the bench.  That will help others as well, because I know there is at least one other gentleman in a wheelchair,who attends earlier than we do, who runs into the same problem.

But mostly, I'm going to work on my attitude.  I'm going to try harder to remember that the reason I go to church is to feel the Spirit and to take the sacrament and renew the covenants I made at baptism.  None of which, by the way, have anything to do with where I sit in the chapel.

If you don't like something change it;
if you can't change it, change the way you think about it.
~Mary Engelbreit

Posted by CompatibleWithJoy at 10:18 PM