We’ve added another character to our home in the past year.  I’m not talking about our precious son, Aaron.  I’m talking about the person that moved in when we had our ultrasound.  Death has chosen to come make our acquaintance this past year.  Oh, he’s not around that often, but he’s here often enough that we can’t forget him.  Before last year, he was kind of an abstract, hazy guy.  Off in the distance.  Someone whom you heard of but never saw.  Occasionally, he paid a visit to a friend of a friend, or a much older relative.  Once, a very painful once, he came for my daughter’s friend.  But that was as close as he ever came.
Last February, he showed up here for the first time.  “Your son only has a 50% chance of living until birth.”  Wait a minute.  We start counting our lifespan AT birth.  What do you mean?  It might be over before then?  Babies don’t die.  Great-grandparents die.  That’s the proper order.  Not the other way around.  But he retreated after a brief introduction.
Then Death came by again in July when we dealt with heart failure.  And again and again with respiratory illnesses through the winter.  Once more when we tried to extubate following surgery and again after we came home on vent settings that weren’t quite enough.  He leaves his calling card in the corner of Aaron’s room.  A reminder that he’s always close.  He shows up quite frequently in the homes of my new friends.   The three little A’s:  Addison, Addylynn, and Abigail.  Nolan and Nalah who knocked me to my knees with their passings.  Little Jacinta here in the US, and Jacinta from Australia’s little Sebastian.  And Angel’s little Emalee is now an angel, too.  And so many, many more.  I don’t think I can come up with five adults in the past five years that I know have passed on, but all these precious ones who are so tiny have grown angel wings and left us.
But Death has also brought life into sharp focus.  We are all of us dying from the moment of our birth.  And none of us are guaranteed a certain number days.  Death gives me the push to run a foot race with Andrew, my 7 year old, which he won.  He reminds me that my teenagers won’t always be in the same house with me and available for chatting or being silly.  He gently encourages me to read one more story or have one more snuggle with Michael, age 4, and let the laundry go unfolded for just a little longer.   Because of Death’s presence, I spend more time just talking with my husband and chatting on the phone with my sisters.  I see my college daughter, Deborah, much more often than I used to and enjoy having Mary, 18, along for errands just so we can be together.  I laugh more freely and cry more easily.
Yes, Death has brought life to the forefront.  We don’t get one without the other.  Death is the only way out of this world, and I for one, don’t intend to stay here forever.  But I’m hoping, praying, that he stays away for a while.  A long, long while.  Because even though I know Aaron won’t be truly gone, he will have just graduated from this life earlier than the rest of us, I’m going to miss him.


Death has come to make our acquaintance.  He has forced me to take a long look at what I really believe about the Plan of Salvation and my Savior’s role in my life.  He has taught me to really look to God and His Son for strength.   Death has taught me about life. 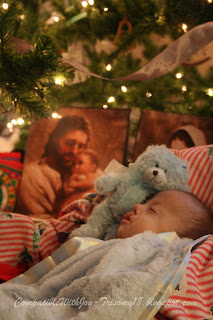 Posted by CompatibleWithJoy at 9:45 PM