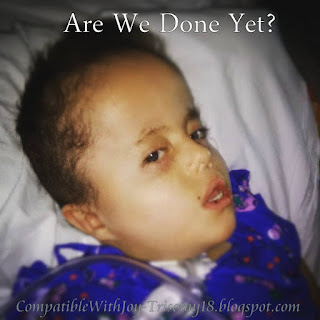 Well, we finally have medication coming.  It should land on the doorstep tomorrow before 10:30, for reals this time.  (Thought it was coming a couple days ago, but that turned out not to be the case.)

The nurse came and trained me this morning on how to break open the medicine (it comes in little glass vials) and how to draw it up, give it, and hopefully not stab myself in the process.

Now we're waiting on the nebulizer 'cause just any ol' nebulizer won't work.  I've got two at home already, and neither will do the job. But reimbursement being what it is, the DME doesn't want to just order it in without making sure they can get as much back as possible.  I get that, really.  Except that, every day we sit in the hospital waiting is costing them more than it would be to just buy it outright and not get anything back.  And since the insurance is the other side of the same company that runs the hospital and DME, you'd think they could move sooner rather than later.  Instead we're saving pennies and burning dollars.

We don't even have to have the machine in our possession.  As long as it's ordered, we're fairly confident that the hospital will loan us one until it comes in.  They just need to know I'm not going to disappear into the night and never show up again.  Like that could ever happen anyway. I mean, this kid doesn't exactly fly under the radar.

Anyway, even though it's a drug that's often given in the hospital, (like really often) it's fairly rare for a kiddo to go home on it.  And even more rare for that kid to have a trach and go home on it.  As in, they tell me we're the first.  So what was challenging and time consuming initially has become even more difficult.

So we sit and we wait.  I do take some comfort in knowing that when the next kid comes along (and they will) it will be a much easier process.  Sometimes being a pioneer isn't exciting.  Sometimes it's tedious and downright boring. I wonder if my ancestors sometimes felt the same way.

"In a word I was a pioneer, and therefore had to blaze my own trail."
Major Taylor

Posted by CompatibleWithJoy at 1:46 PM