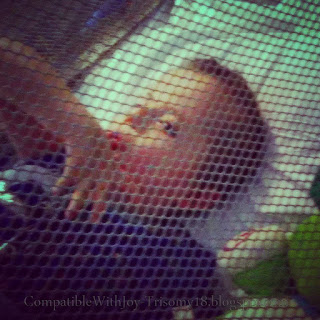 When you've worked all week, making dozens of calls a day all over the state and country, trying to get a medication your child needs authorized and delivered...

When you sleep(?) night after night on a hospital couch/bed...

When you finally get that medication, and it feels like forever, even though the nurse manager says you've moved mountains and gotten things done in less than half the time it usually takes...

When you plead with your child to just hold on, keep breathing...

When your planned day to go home comes, and goes, and you're still in the hospital because now he's not processing his oxygen well enough, but almost...

Sometimes you take a short break, leave him with people who know him well, and step aside to grab a bite to eat.

And the phone rings.

It's the nurse, he's on 15 liters (you left him on 6, or 8, you can't quite remember).  The respiratory therapist is with him.  You race out, rushing back, wishing you'd thought to tell the nurse to start bagging, but also knowing that the RT knows him well and really doesn't need to be told.

The bed is pushed catty corner, to allow more people and equipment in.  You squeeze in, hold his shaking little body as the team works quickly, trying to find a vein.

He's not being bagged, but you don't like the way he looks, the way he sounds, and when the RT calls for a therapy bag to be brought in because it's more sensitive than the typical bag, you reach around and grab yours to hand to her.

All the time, you're silently pleading, "keep breathing, breathe deep, Father in Heaven, help my son, my child, my baby."

And his lungs begin to respond, the IV lasix starts working quickly, the x-ray isn't great, but isn't any different than the one the night before.

And he smiles, and starts batting at toys, and everyone steps back and watches for a few minutes.

The PICU doc makes sure that transfer paperwork is filled out as much as possible in case he turns south again.

He starts sucking on his tongue, a sure sign that he's getting ready to sleep.

And while you're relieved, so relieved, a small part of your heart breaks just a little more as you realize you have to tell the family at home that once again, you're not coming home tonight, and you don't know exactly when you will.

But he's breathing, he's comfortable, and the couch/bed, extended stay, missing family is worth it.  Because he's still here.

“The bravest sight in the world is to see a great man [or child] struggling against adversity.”
– Seneca

Posted by CompatibleWithJoy at 10:35 PM