A New Weapon for our Arsenal 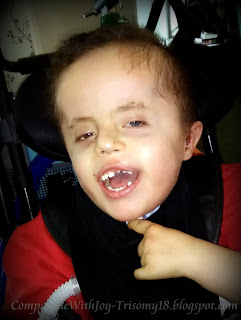 We think we've found the culprit.  And it's what I figured but didn't want to admit. It's his pulmonary hypertension.

Yeah, that beast. The one that is progressive and has no cure.  That (so far) is not reversible.  And it's continuing to get worse. Can you see why I didn't want that to be the answer?

Anyway, over the past few years, we've visited the idea of iloprost, an inhaled medication that will help relax the blood vessels in his lungs.  For various reasons, we've discarded it each time.  But now, we're putting it on board.  We're starting with (only) four times a day.  It can be increased up to 10-12 times a day.  Yeah, every two hours, 'round the clock.   Even with all his other meds that we do, this one is sounding kinda daunting to me.

But then I have to remember, when we first started this journey, his feeding tube scared me speechless, which is a hard thing to do.  Now?  If I needed to, I could instruct someone on how to place one while talking on the phone driving down the freeway, no problem.

So anyway, I'm told that it will take a little time (don't know how long "a little time" is) for it to take a full effect.  BUT after one dose at 2:00 this morning, we started seeing changes, big changes.  Like, I got after the nurses because he was satting 99% and they were just letting him sit there. They didn't know he wasn't supposed to be that high and he was only on 3.5 liters.  It dawned on me that this has never been a problem in the hospital before.  As soon as he's maintaining low to mid-90s, we bust out of here.

So now we watch him through the weekend and make sure things go well, make sure he tolerates the medication okay, make sure his blood pressures don't end up dropping.  Then on Monday they'll train me on administering it, and hopefully, we'll be good to go.

Gotta get our supplies in order and all, but the end of the tunnel is in sight, and I don't think it's an oncoming train.


"Carve a tunnel of HOPE through the dark mountain of disappointment."
Martin Luther King, Jr.

Posted by CompatibleWithJoy at 12:50 PM