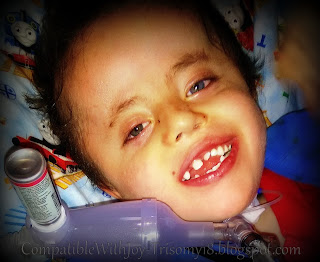 Finally, finally I might be able to see it.

It's been a crazy ride around here this past week (month?  year??).

I was realizing that it was five weeks ago on Friday that he went in for his ear surgery.  That went pretty well, aside from his idea that his ear cap was an optional accessory.  Whatever.  I kept him out of school the next week to recover and sent him back on Monday the 3rd.

Tuesday the 4th had us back at Primary's for a long 17 day stay. Then it was come home and work and fight to keep him at home.  He came home sick, no doubt about that.  When we came home, the hospital also arranged for us to have a few oxygen M-tanks brought in.  For comparison, the E tanks we usually use (and what you see older people pulling) hold about 625 liters of compressed oxygen.  The M tank is over 3400, so roughly five times as much oxygen.  That's also the size tank the ambulance carries, for whatever that's worth.

And we've used two in the past 5 days.  And we only use them when he's needing more than ten liters of oxygen per minute.  There's been some bagging, pushing 100% oxygen into him.  There's been a lot of vest CPT (chest physiotherapy), a lot of albuterol, a lot of prayers and pleading.  And not so much sleep.

Yesterday I have to admit, I was feeling defeated.  It felt like the movie Groundhog Day.  Each day was slightly different, but I wasn't finding the key to getting out.

But when I stopped and analyzed things, I realized it was getting better.  We hadn't bagged him for a few days.  He was spending less time on the oxygen tanks each day.  We started to space out his CPT and his albuterol.  When he first came home, it was every three hours for both, around the clock.  Thank heavens for night nurses.

Yesterday, he only got his vest three times, and when well, he gets it twice, so very close.  We only gave one extra dose of albuterol.  He still needed 8-10 liters most of the time, but wasn't on the tank at all.

And today?  Well, today he's below five liters of oxygen, and satting just fine, thank you very much.  He's still pretty tired, but you would be too if you thought daytime was for sleeping and nighttime for playing.  I think he might almost be better.  He might even go back to school soon.


"And sure enough, even waiting will end ... if you can just wait long enough."
William Faulkner
Posted by CompatibleWithJoy at 2:21 PM