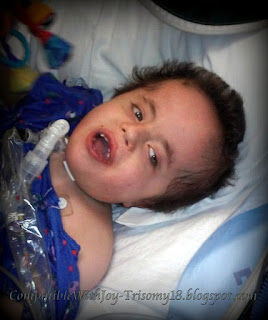 Don't have a clue what happened.  None of us do.  In some ways that's reassuring, in other ways it's not.

Aaron was slated for going home.  In fact, his doctor felt like he could be discharged yesterday afternoon or evening.  I held out for going this morning.  And wondered if I was being overcautious.  I have a personal goal of five liters or less for 24 hours and on Tuesday we spent a few hours at seven in the afternoon, and I just wanted to get in one more night.  So I held my ground, not that he was really all that pushy about it.  It really was a discussion and we came to a consensus. 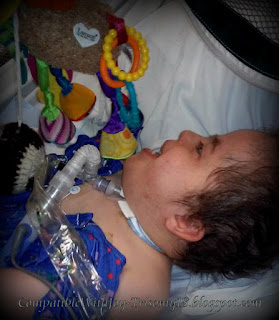 Um, turns out that going home would have been a bad idea.  A very, VERY bad idea.  As the day wore on, it looked fairly mundane, boring, whatever.  We were simply marking time.  By the time I came back from dinner, he was a little higher though, seven liters again.  Then he started having trouble maintaining there.

Often when he gets rhinovirus, his pulmonary hypertension (the high blood pressure to his lungs) goes up and I thought that might be what we were seeing.  To treat that, we flood his lungs with oxygen, they relax, and we're all good again.  It takes about 15 minutes, no longer than 30, tops.  So I told them I was taking him to ten for a few minutes to see if that would do it, and it should have. 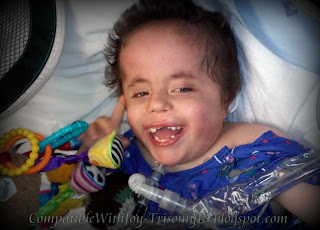 That's not what happened.  By the time that 30 minutes was up, he was dropping more.  And some more.  I ended up pulling out his bag and bagging him.  I bagged him for at least ten minutes before we put him back on.  His nurse suctioned and we really didn't get much.  We had the respiratory therapist come and and do treatment.  Again, it didn't do much.

I lost count of how many times we bagged him over the next few hours.  The attending came by, we got x-rays, drew a blood gas (to measure how well his body was actually using the oxygen that was getting in), consulted the PICU.  In between each of the times, he'd do "okay" and then drop again.  Never super fast, just kind drift on down.  By the time we transferred into the PICU he was "stable-ish" but on 15 liters.  Yep, ten plus five.  Kinda a ways from the normal "five". 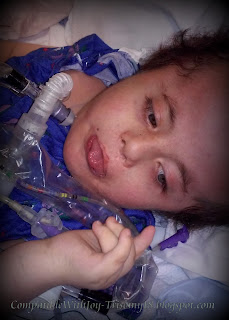 (And yes, this is him playing through the whole thing.)


Patience is the ability to count down before you blast off.  ~Author Unknown
Posted by CompatibleWithJoy at 10:53 AM