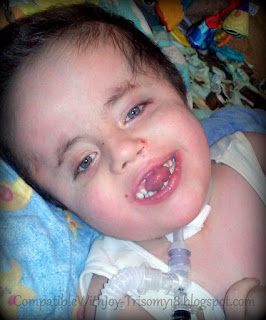 Last week I was sick.  Sick as in went through a (large) bottle of cough syrup, who knows how many kleenex, and countless cough drops.  Sick as in I was in bed more than out for a couple of days.  And it kicked my hiney.  Even after I got better, I slept every chance I could get.

And I hoped and prayed that Aaron wouldn't get it.  I wore a mask any time I was outside my room.  My hands were chapped from washing them so often.  And I added in gloves and a gown if I had to step into his room.  I tried, I tried soooo hard to keep him from getting this mess.

But Sunday afternoon it looked like I hadn't done quite enough.  Somehow, those pesky, nasty germs got him.

He was sad, snotty, and tachy (higher heart rate).  And I packed my hospital bag.

But hey, I like optimism, so we didn't head right out.  Instead, we got very aggressive with breathing treatments, turned up the oxygen, and watched like a hawk. 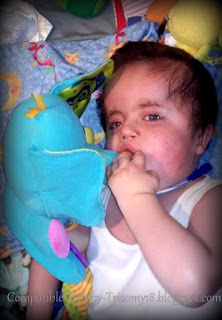 He's still out of school and will be for at least another day while I keep an eye on him, but he's doing pretty good!  Yesterday he was still needing more oxygen, and a bit more suctioning, but we didn't head in.  And by afternoon/evening, we were closer to our baseline oxygen needs.

Today, his nose has pretty much stopped acting like a fountain, he's happy and playing, and we're not pulling anything from his trach.  I'm scaling back the albuterol a bit.  Not stopping entirely 'cause we're dealing with a Utah spring here.  You know, 70 degrees yesterday, snow today.

If all goes well, we'll move albuterol to an "as needed" basis tomorrow and kick him out the door for school on Thursday.

We just might have managed to beat this one without a stay in the Hotel on the Hill.  Pretty awesome, huh?


There are exactly as many special occasions in life as we choose to celebrate.
~Robert Brault

Posted by CompatibleWithJoy at 11:12 AM