Learning to Embrace the Journey 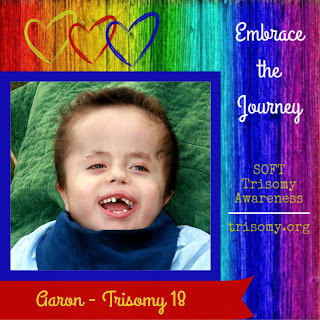 I've put this post off for a long time.  Mostly because I know it's going to stir up a whole host of emotions and memories.


You know, the whole "incompatible with life, I will attend my child's funeral" type of thing.  That one.

Quick recap:  we found out in February of 2010 that our baby would have a lot of challenges.  While they suspected Trisomy 18, we didn't have a definitive diagnosis (via amniocentesis) until April.  He was born mid-June.

I spent much of those months researching and crying, crying and researching.  Gathering information, learning, and crying some more.

I never did blame God.  Understand that.  I did however blame myself, my body.  How could I fail my child like this?

And I hated the diagnosis, that extra chromosome, the fear, the pain, the total certainty that I would outlive my son. (That last part is still hard.) 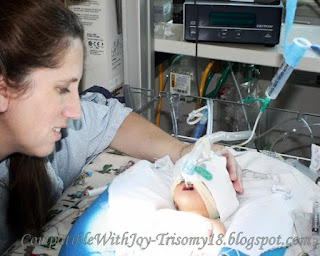 He was born and did well (for his condition) for the first several days.  We didn't see any apnea.  His digestive system kicked in.  His heart looked "okay", again, for Trisomy 18.

Then the first weekend came.  Saturday morning when I arrived at the NICU his monitor showed "apnea."  I asked if it had been "real" or just a malfunction.  Yes, it was real.  His first one.  And he looked different, tired, weary.  We actually made two trips down to the NICU that day, and the second one was even a bit harder.  He looked weaker, sadder in his eyes.  His body was tired.

We had been trying to wean him off of CPAP onto a nasal cannula for a few days and it wasn't going well.  Every time his CO2 (the gas we breathe out) would skyrocket, and they had to put him back on CPAP.

Sunday morning was Father's Day.  As you can imagine, I'd spent most of the week crying (yes, still).  William took the kids to church and just after they left, the NICU doctor called to report on rounds.  He still had not made the jump to the cannula.  I asked if she thought he ever would, and very gently, she said, "I don't know, it's starting to look like he might not."  I thanked her, hung up, and fell apart.

I spent most of the next few hours completely inconsolable.  I yelled and screamed at heaven.  I sobbed so hard it was difficult to breathe.  For the first time in my life I understood why sometimes sedation is necessary when you grieve.  No one else in our family could see that he was dying.  Only me.  And I told God point blank that if He was going to take Aaron back, He had to tell the rest of the family because there was no way I could do this, know this, by myself. 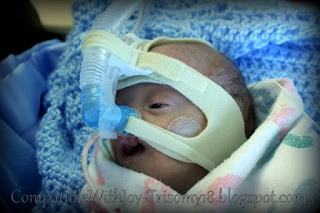 We went down again to the NICU after church for a few hours, and when it was time to come home, Michael (almost 4 years old) threw a temper tantrum because he didn't want to leave Aaron in the hospital.  Either we needed to stay, or he needed to come home with us.  My heart broke all over again because there was nothing else I wanted more.

But our "outside life" also continued.  And the next morning our second daughter was scheduled to leave for a week of high adventure camp in Southern Utah.  Her scoutmaster was an ER doc and he and his wife knew our story, you know, what was going on.  When we went to drop off Mary's gear, his wife and I started talking, and like many women, were sharing stories of our kids, craziness, and even births.

Shortly before we left, we were laughing about some of the funnier parts of labor that I had just experienced and another woman walked up.  She asked how old that particular child was now.

That was a bit of a dash of cold water as I stopped laughing and told her he was a week old and fighting for his life in a NICU.  She apologized and asked what was happening.  I told her he had a chromosomal disorder that was considered to be incompatible with life.  And was totally unprepared for what came next.

She got the biggest smile on her face and started gushing (seriously, she was), "Oh, how lucky for you!  How AWESOME!!  You have a celestial spirit in your home!!"

My eyes widened, my jaw dropped.  I quickly finished saying good-by and walked to the car with Mary by my side, almost hyperventilating, and muttering, "shut-up, shut-up, shut-up" under my breath while Mary kept saying, "Just breathe, Mom, just breathe."

I couldn't believe it!  I was so hurt!  I got in the car and as we were driving home started yelling, pounding the steering wheel with each word.

And there, right there, I can still see exactly where we were on the road, just a little bit north of the high school, in that spot, I began to think that maybe, just maybe, it was okay. 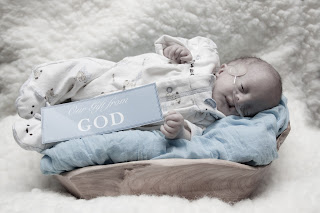 That God had heard my pleas, even my unspoken, unknown prayers, and that He knew what I needed, my family needed, Aaron needed.

And even though I didn't understand, He held us in His hand.  He knew.  He knew my joy, my pain, my sorrow, my grief.

He saw a bigger picture.  And somehow, it would be okay.