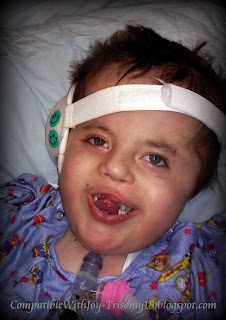 Yesterday was a rough one for this mama.

He slept most of the morning, no biggie there.  He often likes to sleep the morning away.  And he was only on 3 liters of oxygen.  I kept telling them we needed to wait for him to wake up to see what the true picture was.

Um, that picture?  It was kinda, actually downright, not pretty.

He woke up about 1 p.m. and things got rough.  His oxygen requirement went up to seven liters.  In and of itself, that's not that big a deal.  While still too high to bring him home, it was still trending lower each day.

The problem was he was sad, really sad.  This child doesn't cry, but this time he sure did.  And once that was over, he just laid there.  For hours.  There was no need for the ace wrap over his bandage.  In fact, there was actually no need for even bed rails.

Our wild man just laid there.  Didn't move.  Didn't make noise.  Didn't sleep.  Would sometimes make eye contact with me with big, sad looking eyes.  Not a single smile.  I didn't like it.  And neither did the doc and nurses.

So by evening, I'd had enough.  If there was something really ugly brewing, best we get on top of it as soon as possible.  The doctor agreed and we pulled all sorts of labs checking for infection. 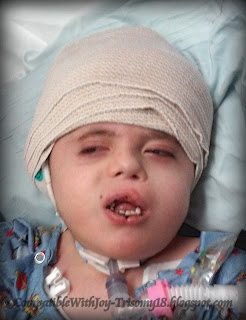 Maybe that's what he was waiting for??  As the labs started trickling in, he started to move, just a little bit.  His numbers weren't great, but they were actually better than his immediate post-op figures.  So I went and grabbed a quick bite to eat.

I got back and someone had found the magic switch.  They were in the middle of changing a really nasty diaper, and he was "helping."  And grinning about the whole thing.  And pulling his cup off his ear.

So he earned himself the turban again, and promptly set to work undoing it, laughing the whole time.  The side rails up, the mesh zipped down, he played HARD until about 3 a.m., and on four liters of oxygen the whole time.

I slept better listening to him play than I had when he was quiet.  We're hoping to escape some time today.  My own heart is doing better.  And my smile is back, too.  So, so grateful.


Through the blackest night, morning gently tiptoes, feeling its way to dawn.
~Robert Brault
Posted by CompatibleWithJoy at 8:24 AM