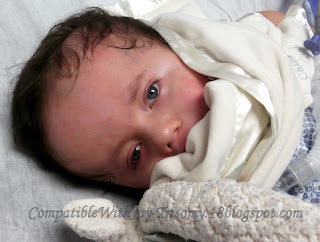 We have a sick little boy.  He had a rough night last night.  Between 9:00 and 11:00, we ended up bagging him three or four times, and for quite a while.  He needed more oxygen.  We gave breathing treatments, and changed out his trach.  He also popped a fever, so he got more Tylenol.  After that, he settled down and slept all night.

What made the difference?  Who knows.  And it wouldn't be a big deal, except it would be nice to know which was the magic bullet for the next time, because my guess is, there will be a next time.  This morning, he started in again, but his fever was also climbing, so he got Tylenol and hopefully we've headed it off at the pass.

His IV went bad this morning just after his antibiotics were given, so he had to get a new one.  My brave little man flinched, but that was it.  And we got it with only two pokes.  Believe me, that's a victory.

His blood cultures from the other night are growing out a bacteria.  We don't know which one yet, but they've sent new cultures and have added another, even stronger, antibiotic.  I'm pretty sure it was a contaminant.  I know that in all the failed attempts at IVs at AF Hospital, they weren't using gloves.  What I can't for the life of me remember is if they still weren't wearing gloves when they finally got the IV.  Yeah, exactly what I was going to notice and remember.  (Par for the course lately.  I've been forgetting a lot of things.) So my bet, and my hopes, are on that being a bad sample.

So we're playing the waiting game.  By tomorrow morning, we hope to know what's growing in his trachea.  By tomorrow night, we should have an idea of whether the bacteria in the blood it's a contaminant or not, and a more definitive answer by Tuesday morning.  This morning, he's still pretty lethargic, but he's awake and sort of playing.  As long as he's got the Tylenol on board, his heart rate and breathing and oxygen sats are okay, not great, but okay.  And right now, I'll take that.


Pain is a gauge of the healing process.
It often teaches us patience.
Perhaps that is why we use the term patient in referring to the sick.
Elder Kent F. Richards
Posted by CompatibleWithJoy at 9:25 AM