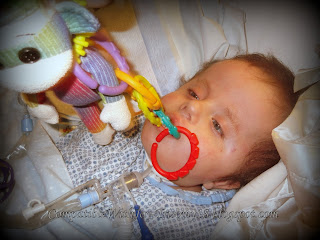 Just a quick update because I've got to be heading out soon for Papa Bear's viewing.  Aaron had a really good night.  Deborah came up for a sleepover with him while I went home for the night to help out there.  Apparently, he decided to expound on all sorts of things during the night and kept her up.

His cultures were negative this morning for bacteria, so they'll be putting the PICC line in this afternoon.  I won't be able to be here, but Gramma Brown's going to stay here and be with him.

He has lost another IV last night, so he's had two in the last 24 hours.  Poor baby.  I'm actually looking forward to the PICC line because that means no more pokes for blood draws or IVs.

So we're looking at a discharge on Thursday sometime, after I figure out how to take care of his line.  I'm a little nervous about it, but everyone keeps telling me that if I can do the trach and  vent, the PICC line will be easy.  So I guess we'll figure it out.  Onward and upward...

All the world is a laboratory to the inquiring mind.
~Martin H. Fischer


Posted by CompatibleWithJoy at 1:45 PM