Have We Got Good Timing, or What? 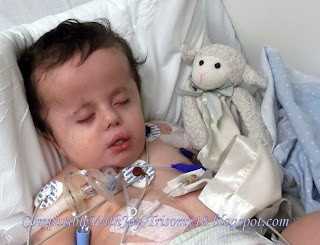 Yeah, we're back.  As in back in our "vacation home."  And the question above?  I think the answer is the "or what."  I'm sure the timing could have been worse, or more challenging, or whatever, but that's hard to imagine right now.

Looking back, I can see that things were brewing.  Aaron was quite the man around town this week.  On Monday, we visited the dentist (who said he looked great!) and cardiology (who was also pleased with what's happening).  Wednesday, he saw the eye doctor, which was followed immediately by a soccer tournament for his brother.  Again, he got a great report, slight astigmatism and slight far-sightedness, totally normal for a kiddo his age.

Wednesday night, he was wiped out.  Me, too!  I think hanging out at 97 degrees at a game can do that to you.  His secretions were also a bit thicker, but I figured that was because of the heat and being off of his humidity.

Thursday was round two of the soccer tournament.  He was needing more oxygen, but still way within normal limits.  And it was hotter, 100+.  He was more tired, and his secretions were still thicker and more copious, but not too bad.  Again, I blamed the heat/lack of humidity.

Maybe I should have remembered that before he ever set foot (wheel?) on the soccer pitch, I was already suctioning a few times a day, which is pretty abnormal for him.  But  I was also distracted.  In the meantime, four of my other boys had dental appointments, my father-in-law was discharged from the hospital to go to an residential rehab program to get him ready to return home, and it was the week before school starts.

Then Thursday night, after we got home from soccer came the call that Dad had coded.  He had been taken back to the hospital to try to get some answers about pain and coded in the ER.  William and I rushed down there, but he didn't make it.  It came as a complete shock to everyone.  He had been doing so much better.  The problems he'd had were all resolved.  It was something completely new.

Which brings us to Friday morning.  Aaron had slept again all night, but was restless.  And instead of waking up to play, he woke to cry.  He's been sensitive to people passing before, and I wondered if that's what it was.  And I still think it may have played into his sadness.  But there was more, too.  His heartrate was higher than it should have been.  I kept checking for fever, but no, it was good.  Secretions were still thick and sticky, but not a whole lot of color.  I gave albulterol to try to open him up, and Tylenol because he was acting like he hurt.  He spent the day either crying or sleeping, and even sleeping wasn't restful.

He stayed home from the tournament on Friday.  I was just not going to mess with that with him.  I was still thinking it might have been the stress from that, but also starting to realize that maybe there was more to it.  I also changed his trach out, hoping that would help.  It did, but just temporarily.

When I got home, he was awake and crying again.  He was struggling more with his sats, and his heartrate had been in the 150-170's range when he was awake.  This is WAY above normal.  His nurse felt like there was junk just below where the suction was reaching, so I told her I was going deeper.  I pulled out a big, thick, sticky, DARK RED plug.  Yeah, not good.  It helped, but again, it was pretty temporary.

So we headed down to the American Fork Hospital.  I figured my chances of it not being "that bad" were about 50/50.  And the first thing back, his chest x-ray, looked just like Aaron, cloudy with a chance of junk.  Nothing different than the dozens I've seen before, so good sign!  But then, his temperature started to climb to 101.8.  Things stalled a bit as it took over an hour and a half to just get his labs and an IV.  Now, the vast majority of the time was spent in looking for a vein, or in looking for someone else who could look, but the kiddo just wasn't sharing his blood.  Fortunately, most of the pokes also didn't seem to hurt, although that may have been because he was just so miserable already.

Labs came back and things weren't looking so good.  His white blood count (the body's fighting mechanism for infection) was pretty high.  It was also heavily banded.  That means they could see it ramping up to create a lot more white blood cells, a sign that the infection was really setting in.  Home wasn't looking too likely at this point.  The only thing left was a urine analysis.  When that looked good, the jury was back.  We were heading north.

So by the time we got here and got settled (soooo glad they "direct admitted" him straight to the floor and we didn't have to stop in the ER here) it was almost 5 a.m.  I'm almost wondering if this kid's trying to change my sleeping schedule.  They've taken a sample of the tissues from his trachea so we can learn what kind of bacteria is being the bully.  That will take about 48 hours to grow out and then they have to determine susceptibilities.  He just ends up on too many antibiotics so they try to just give him the ones that will target the specific bugs he's got.  In the meantime, he is getting some strong IV meds.  Right now, he's sleeping peacefully.  He's so worn out.  But this is a quiet, restful, hopefully healing sleep.  Just what he needs.

Sickness comes on horseback but departs on foot.
~Dutch Proverb
Posted by CompatibleWithJoy at 12:11 PM