I Did NOT See This Coming 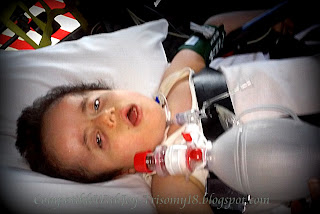 So yeah, we're back in the hospital.  I SOOO thought we were going to beat this at home.  And we were almost there.

Plus, usually, I see the trip coming, at least a few hours ahead of time.  I got no warning with this one.  Like, less than 15 minutes or so.

He actually had a pretty good day, was a touch higher on his oxygen again, but not too much, at least at first.  But remember, he's had rhino, a cold, and usually that puts us in the PICU on massive amounts of oxygen, so I wasn't too worried, even when he went high.  But about 6:00 he was struggling to get out of the mid-80's on ten liters, so I bagged him, you know, just to give him a little boost. 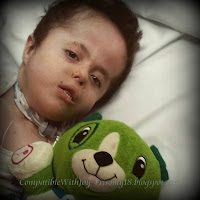 That didn't go so well.  I put him back on the vent, and he dropped again, so I started albuterol.  He'd had it not long before, but I figured we'd try again.  As I started it, he continued to fall, like, mid-70's fall.  So out came the bag, again.  We pushed him back up, gave him some extra this time, and tried once more.  Nope, no dice.

This all happened in less than 30 minutes.  So we called our buddies at Lone Peak Fire for a ride and came on up.  I'm still not quite sure what I have and what I've forgotten. 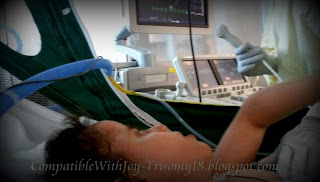 It looks like his pulmonary hypertension has reared it's ugly head, and he experienced an extended pulmonary hypertensive crisis last night.  Often, we can just bag him out of one, but this time it went on and on.  He landed in the PICU on 15 liters (that's 15 liters per minute, so 900 liters per hour!) of oxygen. Sometime during the night, well before he went to sleep, they were able to turn him down to five liters.

We're hoping the worst is past.  Hoping for the floor later today and home tomorrow.  And man, could we just find a way to see his buddies up here socially?  Without having to make a production out of it?

"The twists and turns of your life can be so unexpected,
and that's a good thing to learn."
Christina Baker Kline


Posted by CompatibleWithJoy at 5:18 PM