A Great Big Help, and a Sigh of Relief 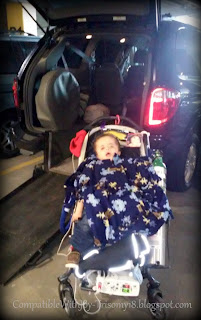 We've been struggling for quite some time getting Aaron out and about.  He weighs almost 50 pounds, his stroller is about 35 pounds, plus all his equipment.  It's gotten to the point where he often just stayed home, even before the weather turned bad.

We had hoped to work something out with Make A Wish, but their regulations wouldn't let us do it.

But thanks to a very generous person, Aaron got some new (to us) wheels this week!!

He took his first trip in it today up to the hospital (where else?).

Talk about a blessing!!  I knew it would be easier, but I didn't realize how much easier.

On a good day, when everything aligned just right, it took me almost ten minutes to shift him and all his "stuff" from the car to his chair, and another ten minutes when getting back in the car. 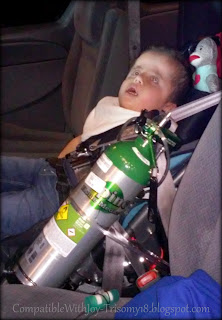 Today it took me about three minutes to unload him, and that was taking the time to snap a few pictures.  It took a little longer to load him, but that's because I'm still trying to fine tune the straps that hold his chair down.

It's a rear-entry, which means we can park wherever, we don't have to have an empty space next to us to load and unload.  And he fits right up between the two 2nd row bucket seats.  There's even a fold-down two-seater jump seat in the third row position.  So we can seat six people, plus Aaron.

This will be a life-changing event for him.  The freedom he now has, the ability to get out and about.  And obviously a lot less wear and tear on his ol' mama's body.

And then the sigh of relief.  In my last post about processing, I mentioned that his most recent echo was not very comforting.  Today, in addition to his post-op visit with the plastic surgeon (went great), he also had labs drawn.  Among those labs was one that measured how hard his heart was having to work.

I've been anxious and nervous for the past two weeks about that one.  In fact, I even wondered if it would be bad enough that they might make me bring him in to be admitted.  Yeah, I know, I'm a worrywart. It's nothing new. 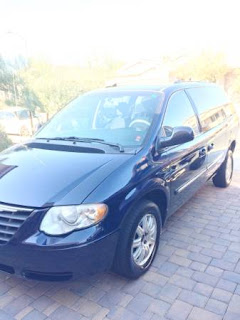 Shortly after we got home, the results were in the computer.  They were even better than the last time they were drawn.  66!!!  Anything below 100 is considered normal.  Normal like you or me.  Not "normal for a heart patient."  No, ours aren't necessarily that high, but it's well within a normal range.

So my guess is we won't be adding another medication and we'll hope for a better echo when he's seen again in six months.  So, so grateful.

Now if we could just get his sleep patterns back to normal....

Travel and change of place impart new vigor to the mind.  ~Seneca
Posted by CompatibleWithJoy at 10:11 PM