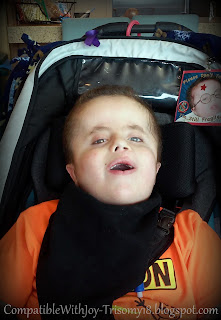 It's now been a week since our marathon day of appointments.  I've been trying to process what all happened.

Actually, to be honest, a lot of the time I've just tried to forget what I was told and pretend that everything is the same as before.  It IS the same on the outside.  It's just I now know things I'd rather not have be a reality.

I guess it's really not that bad.  Not bad enough that they want to do anything right away.

Anyway, so here's the report:

We saw dentistry first. He wanted to make sure the splint was still in place and that the bone graft was healing up.  It was.  Place a tick mark on the good side of the chart.

Next was labs.  We needed them before seeing hematology later that afternoon.  He's a really hard stick, so that can be dicey.  But it turned out that they didn't need to do a draw from a vein.  A finger poke would also work.  So not too hard. 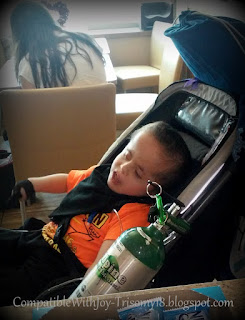 He'd had a higher heart rate all morning, so I also took the time to change out his trach.  It wasn't completely blocked, but it was pretty goopy inside.  And once I changed it, his heart rate dropped to where it was supposed to be.

Then we hung out for a while in the Ronald McDonald Room waiting until our next appointment.

Side note here:  this is a wonderful room with a place for relaxing, computers, and a full-sized kitchen.  If you're ever wanting to help out in a small (big!) way, volunteer to cook a meal there for families.  It's a one-time commitment where you go in for a few hours and makes a huge difference for those who are living up there. 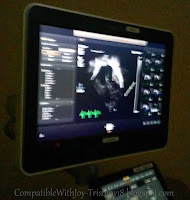 Then it was time for cardiology.  We did an echo and an EKG.  I'm not very good at reading the echo, but it looked a bit different.  Different isn't always a good thing.

It turns out that the right side of his heart isn't working quite as well as it used to, and he's got a couple of valves that are a little leaky.  Aaron has to have monthly labs, and next time we do them, we're adding in one to check for heart function.  Dr. M. said it wasn't bad enough that it was worth an extra poke right then, so he obviously wasn't too worried.  But you can bet your boots we'll be right on time getting them done this month.

We may also have to add in another medication.  'Cause you know, 175 doses a week just isn't quite enough.

However, maybe I'm just looking for excuses, but the air quality was beyond awful last week, and there are all sorts of studies showing that bad air quality impacts both hearts and lungs.  So I'm going to go with that.  A girl can hope anyway.

Then we rounded out his day with a visit with hematology.  Dr. ENT wanted us to see them because of the trouble he had with all the bleeding after his ear tube surgery in December.  Given that we've got a much more extensive surgery coming up in a couple weeks, that makes sense.

That one was a neat pick-me-up experience.  The long and short of it was that his platelets (clotting guys) have never looked better.  All the labs looked good, he has no bruising, hematology was glad to meet us but said they'd just say "hi" as we pass in the hallway.

BUT, the fun part was the hematology fellow who came in before the attending.  She remembered Aaron from way back when, when he was just a tiny little guy.  She was a resident on his team in October of 2010.  Yeah, last visit before his trach.  And while she doesn't remember all the details, my money is on her being the one who ultimately saved his life.

Aaron was in (again!) for hypoxia, low oxygen sats.  The resident, a woman, and probably her, was really puzzled.  She asked if I minded getting another swallow study even though he'd passed one about six weeks earlier because she couldn't see any other reason for these repeated admits to the hospital.

Well, we did it, he didn't do it.  In fact, he failed almost immediately.  This resulted in his ng-tube (feeding tube through the nose into the stomach) being changed to an nj-tube (through the nose and into his intestines) and a fast track for surgery.

Because of those findings, Dr. M in cardiology and Dr. C in genetics started contacting surgeons, a distant relative who worked at the hospital got on board too, and we had a date for a g-tube and nissen two weeks later, timing that is almost unheard of.

Meanwhile, unknown to everyone, Aaron's airway was becoming more and more compromised.  In hindsight, if his surgery had been even a few days later, he would have passed away before surgery.

If it hadn't been for that resident's curiosity, we would have lost our little bug.  And to be able to tell her about her part in his life, well, that brightened my whole day.  And made the bitter news from earlier just a little bit more bearable.

And this week?  Well, Aaron continued to struggle with the poor air quality.  We had to really step up his breathing treatments.  But a windstorm has come through and blown out the gunk, so now he's needing a little less support.

There is something else in the works that will also make his life easier and better that will hopefully be finished next week.  So stay tuned.  More excitement up ahead, as always.

Oh, and if you haven't been following his Facebook posts, I've actually managed to get a picture and something up almost every single day this month.  You can go to this link and see what all is happening.   If you "like" his page, it should even show up in your newsfeed.

I have sometimes been wildly, despairingly, acutely miserable,
but through it all I still know quite certainly that just to be alive is a grand thing.
~Agatha Christie
Posted by CompatibleWithJoy at 7:14 PM