When You're Told Your Child Will Die... 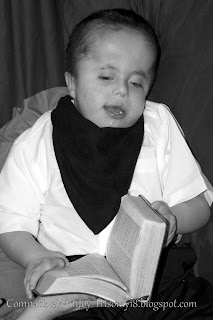 When you're told your child will die, your whole world shifts.

You know the song "Where Were You When the World Stopped Turning?"  Well, that describes it pretty well.

You look outside and wonder how everyone else seems to be carrying on, normal life, the little things, and they don't realize what has happened.

And other things change, you change.  Words change, thoughts change.

You learn you're stronger than you thought you were, but also weaker.  You find your character.  It burns away the unimportant and you find out exactly who and what you can depend on, and sometimes it's surprising.

We used to say a lot, do a lot, that we just don't do anymore.

Before, when the kids would say, "I'm going to die!" very melodramatically, "oh, woe is me," type of thing, I'd flippantly reply, "not this week.  I don't have time for a funeral."  Or "what color casket do you want?"  Yeah, those words haven't passed my lips for a long time.  In fact, so long that my younger boys don't even remember me saying them.

The littlest phrases carry a lot of meaning.  I can ask, beg, threaten, rant and rave, and be ignored.  But if I say, "Need a little help in here," everyone jumps, and someone brings the landline in case we're calling 911.  See, those words, in that combination, means that something's going down with Aaron, and not in a good way.

When a new baby was born, we'd take a picture of the baby with the older sibling and make shirts.  "I'm the big brother."  Or "I'm the big sister" and put the picture on the back.

Somehow, I just couldn't see the kids wanting or wearing a shirt with a picture of them holding their brother who had already passed on.  So we didn't make them this time.  Instead, I made photos with mats that said, "Big Brother to an Angel" or "Big Sister to an Angel."

Well, as part of Christmas, I finally got around to making a couple of memory blankets for two of the boys out of old t-shirts.  David had several of his "big brother" shirts in there, and that prompted Michael and Andrew to ask about their big brother shirts with Aaron. 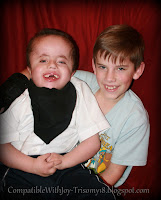 And they want them, they really do.  So we finally took pictures of them with Aaron for that purpose.  It'll still probably take me time to get around to making them, but that's more a product of time constraints than anything.

But I've changed in other ways, too.  I try not to take life for granted anymore.  I want to feel, to experience, to love.  I want to spend more time with people.  I reach out more.  I look inside more, too.

I try to decide if something that's "so important" now will still be important in five or ten years.  Is my opinion just that, my opinion?  Or can it, will it make a difference if I speak up? 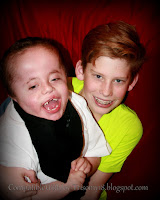 I look to my God more, reflect on where my strength comes from.  I know He is a God of miracles, I've seen it.  But while I know He has the healing power, I also know that often He strengthens us to endure our trials instead.  Because there are some truths we can only know after passing through the fire.

When you're forced to look at life, really look at life and death, you see in a different focus.  The important is brought forward, while the rest fades into the background, where it belongs.

When you're told your child will die, a part of you dies, too.  But another part holds onto every last moment with a courage and strength you didn't know existed.  It's beautiful, it's painful, it's exquisitely powerful.

It is life, in it's purest, most vulnerable, sensitive, loving, overwhelmed, and inspired form.