Well, we made it home on Friday.  He's still pretty swollen, but he's also been happy since that really rough time on Thursday night.  I'll take that.

We also had some "fun" with heart rhythms and labs.  You know, 'cause we had to keep things interesting. 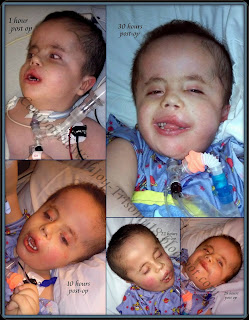 Turns out the heart rhythms were nothing that cardiology was really concerned about, especially given that he'd just had surgery. He was having some possible PVCs.  I know you know what those are.  I do, too.  They're long pieces of plastic pipe, like what we used to build his frame for his toys over his bed, right?

Actually, they're "premature ventricular contractions," or where the lower part of the heart starts the beat just a little bit too early.  Well, they did an EKG (electrocardiogram) and some labs just to check things out.

And as often happens, in looking for one thing, another pops up.  Turns out he's got some higher levels of creatinine, a substance which may indicate trouble with his kidneys.  Plus, there was a thought that while the EKG didn't show any PVCs, it might show a borderline Long QT syndrome.  Fortunately, again, cardio didn't think so.  But we'll be sure to ask about it in a couple weeks when we visit.

Plus, his ENT is just a tad concerned about his ability to clot given that he didn't want to do that during his ear surgery in December.  Since he's got another one, much more extensive one, coming up March 2nd, Dr. ENT wants us to follow up with hematology prior to then.

Our awesome attending on the floor got in touch with hematology and got us an appointment for the same day as our cardio follow-up in two weeks.  And we have orders to get more labs done this week.  Poor kid is turning into a pin cushion.

Now, I just have to make appointments with dental and plastics for follow-up regarding his surgery.  It felt a bit like a three-ring circus as we tried to figure out everything and line up all the ducks to try to get out on Friday.  But we did it!

And speaking of his surgery, I think we've come up with a new retirement plan for William and I.  See, I found out that Peyton Manning had a cleft palate as a child.  When he was about 8, he had the very same surgery that Aaron had on Wednesday.  So I figure, Aaron's already ahead of his timeline by three years.  So we're planning on a successful NFL career to support us in our old age.  I mean, it could work, right?

Anyway, recovery is coming right along.  He finishes his antibiotics today, and we're also changing from giving his pain medication on a schedule to just when he needs it.  The swelling is starting to come down.  He can open his eye all the way and the bridge of his nose is now well-defined.  He'll still have to wear his brace for several more weeks, but he doesn't even seem to notice that. He's back to chewing on everything and acting pretty much like his happy self.


Being happy doesn’t mean that everything is perfect.
It means that you’ve decided to look beyond the imperfections.
Author Unknown
Posted by CompatibleWithJoy at 3:56 PM