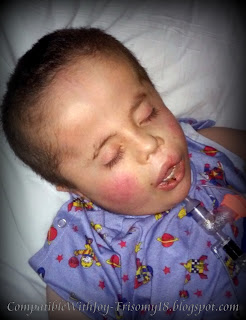 It was a rough night from a pain standpoint.

He went to sleep fairly early, but about midnight, I heard something.  The nurse was in here, trying to help him, but he was just crying.

Sobbing and sobbing, inconsolable, in so much pain.

We tried hand massage, head massage, obviously sucking on something was out, as was back rubs because he would have had to lie on his sore face.

We had pain meds on board, but oh, he hurt.  We were trying to avoid ibuprofen because of his low platelets, but decided that something had to be done.

So now we're piggy-backing both Tylenol and ibuprofen and he's resting better.

The doctor wants to keep us one more night just to make sure it doesn't repeat.  The swelling should peak sometime in the next 24 hours.  He's resting now, probably the best medicine.

On the positive side of things, his breathing has been great.  At least we're not having to worry about that this time.


To hurt is as human as to breathe.
J. K. Rowling


Posted by CompatibleWithJoy at 11:58 AM