I didn't realize how stressed I was before this surgery, or how exhausting that stress was. 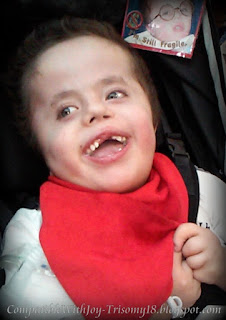 It has been a busy couple of days.  I tried to get everything sorted and put together.  Monday we went in for labs to make sure we knew where everything was.  I mean, he bled a LOT after a little nothing surgery in December.  This was more involved and if there was going to be a problem, we wanted a heads up.  They all came back pretty good, at least for Aaron. 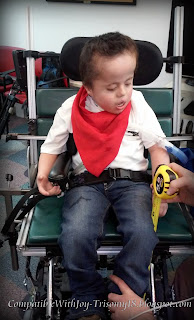 In an effort to curb infection, the hospital asks that patients have a bath the night before surgery with clean jammies and bed linens.  Aaron's not real fond of baths, not real fond of haircuts, and he needed both.  So I figured that's what we'd do on Tuesday afternoon/evening and we'd be good.

Except then I got a call Monday late afternoon from Shriners.  He's due for a new wheelchair and we had an appointment for the end of April for a fitting and then the beginning of August for pick-up.  Shriners had a last minute cancellation for Tuesday afternoon, and did I want it? 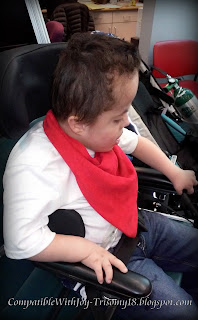 An hour each way, plus a two hour appointment adds in four hours that I hadn't planned on.  Then I had to factor in the exhaustion that always seems to accompany these appointments and drives.  But still, a new wheelchair, one that would fit him and his equipment so much better three months earlier . . .

Yep, I took it.  And it was quite eye opening.  He doesn't really sit that well in his chair.  I told them we needed an incline because it was the only way to really help him be comfortable.  The therapist suggested that might be because it wasn't fitted right.

They put him in something they called a "simulator" and my kid sat up, almost completely upright, for over an hour!!  At least when he wasn't rocking out to the music.  No scooting down, no trying to slide out.  And he had fun!  And even took a little nap.  You know of course every time I tried to get video of him singing he clammed up.  Oh, well.  You'll just have to imagine it.  But I'm excited about how this can improve things for him.

It will be a little bit of an adjustment as we learn to work with it.  It's much heavier than his current one, so I'll have to figure out how we're going to heft it in and out of the car, especially when I'm on my own.  But I still have three months to figure that part out.

So then it was get home, try to catch my breath, haircut, bath, clean bedding, and bed for both of us.

Fortunately, he wasn't first on the schedule today.  We checked in at 8:45 instead of 6:00.  Blessing.  He still thought it was too early.

It took a little while, okay, quite a while, as we went over his recent labs and there were several questions about the bleeding and then re-admit after his last surgery.  Then he was off.  I was told it would be about a two and a half hour surgery.

First was dentistry who cleaned and checked all his teeth.  Then the plastic surgeon who fixed his cleft and the orthodontic who made the impression and the splint that he will wear for the next six weeks.  Dentistry came about 30 minutes into it, right on time, and said his teeth looked amazing.  Then the surgeon showed up about 30 minutes later saying he was done!

When I got back to see him, he was just waking up, although he wasn't sure that's what he wanted.  He was more than content to just keep snoozing away.  There wasn't much swelling, but we were warned that it would change.  By mid-afternoon, it had already started, and tomorrow will be even worse.

We both took naps once we got to the room and right now, he's doing pretty well.  He's not sure what to make of the plastic guard in his mouth, and keeps trying to find the hole he's always stuck his fingers and tongue through.  So far, his pain is well controlled.

I guess we'll see what tomorrow brings.  Hopefully, it's home.


Posted by CompatibleWithJoy at 9:41 PM