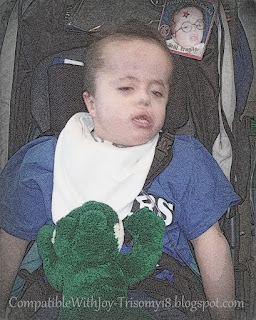 We've had some boring around here.  That's good.  We like boring.

Aaron went in a week ago for his post-op appointment.  You know, the same day surgery that landed us back in the hospital for a week?  Yeah, this kid has some interesting ideas on the length of a "day."

Well, we had hoped that the surgery would fix things.  Hoped but not expected.  Well, good thing we didn't expect it.  I've mentioned before I really good at denial.  I was hoping the stickier stuff in his right ear was just wax and old blood, but didn't really think so.  It's not.  It's continued drainage.

So onward and upward.

In other news, Matthew has been part of a Musical Revue this past weekend.  Man, these kids can sing and dance, make you laugh and cry.  Have I mentioned I love music?  The them was "Be the Hero of Your Story."

So many of us sail "Into the Fire" because we must.  Our children need us to take up the fight for them.

Mountains surround us, walls block our way, there's terror, fire, valleys, and lightning.  But someone has to face it, rally and rush in for these precious ones.

And as their parents, we've been chosen and accepted that challenge.

We will be touched, we will be burned.  But our scars are battle scars, and our children are worth it.  Not only our special needs children, but their siblings who learn courage and creativity and determination from us.

And we will win.  Because we must.

Here are two of my favorites from the show:  "Into the Fire" from Scarlet Pimpernel and "When I Grow Up" from Matilda. (I claim the guy on the right in the thumbnail.  Isn't he great??)

And if it's not right, you have to put it right.But nobody else is gonna put it right for me.Nobody but me is gonna change my story.
Sometimes you have be a little bit naughty.
Matilda

Posted by CompatibleWithJoy at 4:49 PM