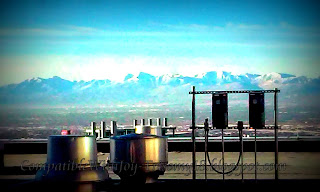 This was the view outside my window this morning.

Last night, Aaron transferred to the floor and he's done pretty well up here.  But during the initial exam by the hospitalist, we heard a new sound in his heart.  One we haven't heard before.

And it was distinct enough that my uneducated ears could hear it, too.

Everyone knows the heart makes a lub-dub, lub-dub sound.  At least it's supposed to, right?  But sometimes, it makes other noises, too.  Sometimes it's no big deal, and sometimes it's a VERY big deal.  And we didn't know what this was.

In the past, we've sometimes been able to hear a "split S2" sound in his heart.  You know, the "dub" part.  It's not a problem, at least the split isn't.  It's caused by his pulmonary hypertension and it comes and goes.

But what we heard sounded more like a "split S1," (the "lub") something not often heard until someone is in their 40's or so with an unrepaired heart. Yeah, he may be older than a lot of T18 kiddos, but he's not that old!

All of a sudden, I found the anxiety ramping up again.  Really, when anything "new" comes along, it happens.  Fortunately, cardiology was more than willing to come take a look at him.  Turns out that it's not a split S1, it's a clicking noise.  (Who'da thought the heart could make so many different sounds?)  And it's caused by the valve that goes between his heart and the blood heading to the body (aortic valve).  Apparently, he's got a bicuspid (two) instead of tricuspid (three) like most people and it was making a noise as it opened and closed.

This earned him an EKG during the night (which was normal) and an echo on Monday.  But this morning, it was all quiet again.

And I reminded myself, once again, to just breathe, be still, and let go.  Sometimes that's hard to do.

That's what I was thinking about this morning as I watched the sun touch the tops of the mountains on the other side of the valley.  There were some interesting apparatus outside our window, and they didn't contribute much to the view.  I could choose to focus on them, or I could look at the big picture, look beyond the metal shapes, and see the grandeur of God's glory.

I could focus on us being here in the hospital, waiting for Aaron's heart to be happier, all the things I can't be doing, places to go, etc.  Or I can enjoy playtime with our perfect tattered angel.  I can make friends with other parents here, laugh with our nurses and RTs.

A couple weeks ago, I was asked what I thought our chances were of being home instead of in the hospital for the holidays.  It's probably about 50/50.  (Except I've now told Aaron this counts as our holiday visit.)  50/50 doesn't sound so good, except there's only one way to guarantee we won't be here.  And we're not going to talk about that one.  And that's how I try to deal with what we do.  It's more than worth it, the struggles, the difficulties, to have him in our lives.

Aaron is doing better, really he is.  He's just not better enough for us to come home yet.  Today he spent five hours off the vent.  It wore him out, but he's processing oxygen better.  It's kinda like when you have sore muscles after a workout.  (Not that I've really experienced that in a long time.)  It hurts, often for a few days.  And there's nothing you can really do to hurry up the healing of those sore muscles.  This is going to take some time to get his heart back where it is working as well as it was before.  But he'll do it.  We'll get there.

It's all a matter of perspective.  And I'm working on mine.


A penny will hide the biggest star in the Universe
if you hold it close enough to your eye.
~Samuel Grafton
Posted by CompatibleWithJoy at 8:12 PM