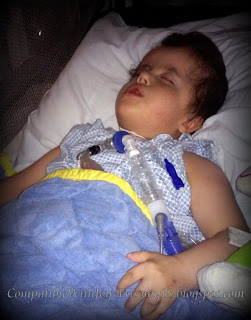 Last night, Aaron made the jump to his home ventilator.  So yea!

In fact, this morning, he was only on six liters of oxygen.  The doctor asked if I was comfortable discharging today from the PICU or I thought we needed a day on the floor first.  I knew we weren't ready to go home today, so we decided on the floor.

Except, once again, we forgot to ask Aaron.  I was a little leery of the plan because he was asleep and had been, but still, it was only six liters.  I'm not real comfortable taking him home on six, but if we're at home, I also don't bring him in for it.

Then he woke up and his oxygen needs went up.  And up.  And up some more.  Yep, to the tune of 15 liters for a good part of the morning.  Yeah, not so good.  The floor won't touch him when he's that high.

So we're still in the PICU.  Daddy came up and gave him a back rub and brought up the wheelchair so he can be more upright.  It helps to get the junk moving out and the oxygen moving in.  But he's still pretty darn tired.

He just fell asleep again, completely wiped out.  And guess where he is. Eight liters and satting 96%.  Probably turning him down again.  Part of me is wondering if we made the jump too soon.  Really, we're pushing about the same amount of oxygen through this vent as we were through the other one.

Oh, well.  He'll get there.  He's really, really tired, but he did smile and play, and  even laugh when Daddy was here.

And I've made some new friends while we're here.  There are some truly beautiful souls up here, fighting big battles along side their little ones.  I am made richer for knowing them.

Posted by CompatibleWithJoy at 7:25 PM