The last three days the PICU team has talked to the floor team about us transferring.

The last three days, Aaron has emphatically said, No!  And each day just a little louder.

Today was no exception.  In fact, we've taken to repeating some tests just to make sure things are on the right track.

He's needed more and more oxygen again.  Right now, he's asleep on ten liters.  We might be able to come down some more, but he was really struggling awake on 15.  Yeah, that's five plus ten.  Fifteen.  We bagged him, gave albuterol, finally decided just to tolerate mid-80's for a little while, and then he fell asleep and we were finally able to gain some headway. 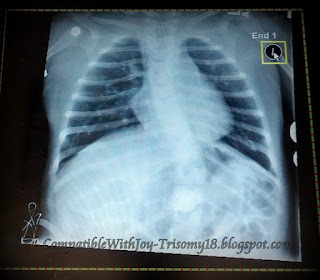 Repeated chest x-ray, which looked the same.  Going to repeat his "protected brush" but hopefully not until he wakes up. That's where they reach down into his lungs with a sterile brush and gather some cells, then grow them out.  And while we're waiting for results, they'll change up antibiotics to make sure we're covering other bugs. 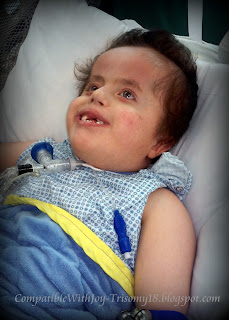 But he's happy, playing, goofing off.  So we do have a step forward.

And eventually, we'll make it to the floor, and then home.


Optimist: Someone who figures that taking a step backward after taking a step forward
is not a disaster, it's a cha-cha.
Robert Brault
Posted by CompatibleWithJoy at 7:24 PM