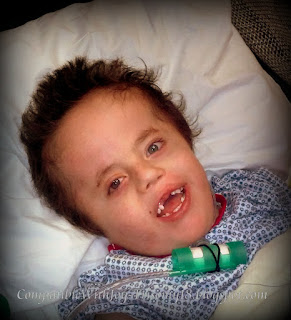 This kid is looking good!  I mean, really!!  Check out his picture.  That green thing, that means he's breathing on his own, off the vent, just with oxygen bled in.  ('Cause you know he likes his O2.  Gotta have it.)

And he's been off the vent satting in the mid to high 90's on three liters of oxygen for most of the day.

Back on Thursday, when a few of us starting thinking maybe we were looking in the wrong direction, I asked them to try something.  I asked if we could try taking him off the vent and see what he did.  The vent works under positive pressure, which makes lung pressures higher.  Our lungs work with negative pressure.  The attending agreed and wrote the orders.

The poor RT.  Our nurse called him and said she needed him to come over to bed 6 and take her kiddo off the vent.

When he showed up, I smiled and raised my hand.  "Crazy lady, that's me.  My idea."  We started joking about how the nurses in the PICU take care of crazy ladies, and sometimes their kids, too.  But, it worked.  He only made it three hours on Thursday, and another three or so on Friday.  Saturday and Sunday were a little longer. Today he's close to nine hours and still going strong.  And we usually get eight to ten at home.

He had an echo this morning that had lots of big words and findings, but the most important line for today was the last one.  "Compared with the prior study, there has been no significant change." 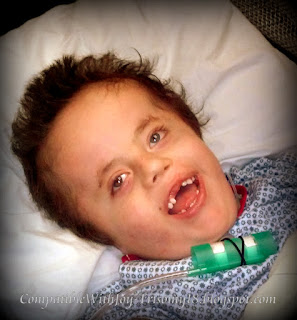 So as long as he can maintain this for the next week, he's got a good shot at being able to have his surgery next Tuesday.  I mean, it's possible that anesthesia will put the kibosh on it.  But Dr. M. said that as long as he could get to baseline by Tuesday (that's where he's at and it's Monday) and maintain it all week, and  we could get an echo that looked Aaron-good, surgery should be okay.

Before we leave tomorrow, they'll give him another immunization.  See, they give kids a pneumococcal vaccine (Prevnar) as part of their scheduled shots.  But the one kids get covers 13 different bacterial infections.  The one recommended for older adults covers an additional 10, plus it covers the original 13 but in a different manner.  Kids can have that, too, but they reserve it for kids with underlying conditions, say like chronic lung disease.  Yep, my kid.

We've also been looking at his immune system.  Those tests aren't all back yet, but we'll be following them, too.

I think we may be locking him down for the winter though.  I hate to do that to him.  He loves to get out.  But his health is so important.  And he's got another surgery already scheduled for the end of January.  No way they'll do that one if he's been sick.  This one is short and simple and needs to be done sooner rather than later.  That one is longer and they'll put it off if he's not 100%.

So onward and upward, and we'll be home for Thanksgiving.  And hopefully, he's been listening as I've told him that this was his holiday visit.

Posted by CompatibleWithJoy at 8:09 PM