His "Spark" is Back! 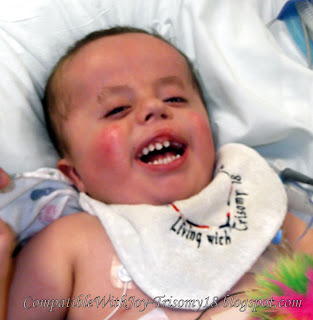 Aaron kept me up most of the night, but in the best of ways.  He was laughing and playing and pulling his leads off.  All. Night. Long. Yep, his "spark" is back.

He's still on way too much oxygen, 70%, but we can work with that.  They're also in the process of weaning off his nitric oxide as it doesn't seem to have helped at all.  He's also still getting his shake vest treatments.  That one he thinks is a spa experience!

We've got a ways to go before we can start thinking of going home.  He's on continuous feeds right now because he was struggling with larger volumes he usually gets.  We need to work back towards that.  He's on too much oxygen right now to switch back to his ventilator.  He needs to reduce those needs, make the switch, and then reduce again to where we can safely have wiggle room at home.  It's not going to happen overnight.  But he's on the right track.

In an interesting development, the protected trach brush culture has grown out something.  (That's where they take a swab of cells from down in the lungs.)  It's growing out the same bacteria we were treating just a few weeks ago.  I'm not sure what it means, but his last antibiotic treatment, through his PICC line was almost exactly a week before we landed back in here.

But it's still the virus, rhinovirus, the "common cold" that's got him.  There's starting to be a little bit of talk about how maybe it's mutated once again and that's why it's hitting so hard.  There are a lot of really sick kids up here with it, more than they usually see, and sicker as well.  I'm starting to feel like a broken record, but PLEASE, wash your hands and avoid people, stay home, if you're sick.

On another note, it's September 11th, 9/11.  I am so grateful to be living in this great country of ours.  On that day 12 years ago, I had gotten up early.  I can't remember why.  But the alarms in the house went off at 5:50.  That was 8:50 a.m. Eastern Time.  I was in the kitchen making lunches for school and I heard William get up and head straight downstairs.  I thought that was a little odd as he usually didn't come down right away.

He put his hands on the counter and said, "Life as we know it has just changed."  I immediately started trying to figure out what had happened in Arizona or Utah, as that's where the majority of our extended family was.  He told me a plane had just hit the World Trade Center.

My dad is a pilot and I was trying to figure out what kind of idiot was behind the controls on a plane that couldn't miss the World Trade Center, because obviously it wasn't an experienced pilot.  And what kind of an instructor let such a person fly the air space above Manhatten anyway.  It was when we turned on the TV and I saw it,that I realized it was no accident.

Oh, my heart ached for the people in those towers, in the planes, for their loved ones.  I remember that just after the news announced that all the planes in the sky were now on the ground, a jet flew by overhead.  It was a military plane, taking blood products back towards New York.  Blood that was sadly not needed.  We participated in a candle lighting ceremony, and "God Bless America" brought tears to my eyes in a way that it hadn't before.  May God bless our great nation.  May He draw us closer to each other and closer to Him.  May we never, never forget...


My friend asked me the essence of life and I smiled.
~Mike Dolan
Posted by CompatibleWithJoy at 9:25 AM