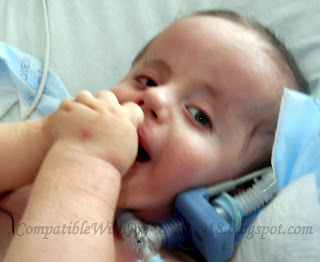 We're seeing progress here!  I'm not going to put any kind of feel on when we'll break out, 'cause that just invites fate to step in and change things around.  We've done too many of these "one step forward, two steps back and a slide to the side" to discount that possibility.

Today, we've been high, like up in the 90's FiO2, but he's also been a lot lower, and spending time down lower.  Right now, at this moment, he's on 45% FiO2 and maintaining 93% sats.  When he wakes up, he'll probably need more, but still, this is big progress.  He's also back on his home feeding schedule.  That's got to feel good to have a full tummy again.  I know I always feel better when I'm not hungry.

So, the steps we need to take to get out of here.  He's still on the hospital vent and he'll need to drop his oxygen usage (FiO2) a little more before we can try to transition back.  Then he needs to be using three liters or less (his vent measures oxygen differently than the hospital one) for 24 hours.  And like I said, I'm not even going to verbalize a guess as to when that will happen.  But I do know that generally, when Aaron decides he's doing okay, he makes progress pretty quickly.  So onward and upward, or downward, as the case may be.


"A sacred burden is this life ye bear. . .
But onward, upward, till the goal ye win."
-Francis Anne Kembel

﻿
Posted by CompatibleWithJoy at 9:46 PM