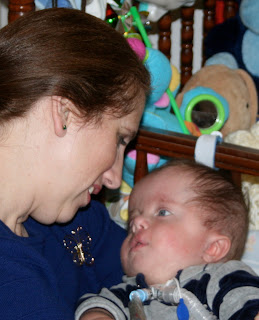 I'm not sure where this post is going, so please bear with the ramblings.  Or at least know you've been warned.

Aaron continues to do well.  He's finally off all his antibiotics, for which his little bum and our diaper bill thank him.  He had a little bump from the weather front that blew in over Friday to Saturday, but that meant that we gave him a second albuterol treatment in 24 hours.  He can have up to four.  Last night, the only alarm I heard was his high oxygen alarm.  We like that one.  All we do is turn the oxygen down a little.  His nurse said he'd set off quite a few vent alarms, but that was because he was having so much fun wiggling and playing on the floor, not because there was any issue.  So that's the Aaron news. 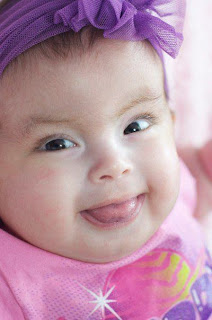 Early Sunday morning, heaven gained another angel.  Little Sophia was (and is!) 26 months old.  Her mom took her in Saturday night and she had double pneumonia.  Early Sunday, it was just too much for her little body and she went home.  My heart aches for her sweet family.  She had a wonderful smile that would brighten my day.

Last Februray,when Aaron had pneumonia, I was more scared than at any time since he had first come home from the NICU.  More than when he was in heart failure.  More than when he was life-flighted from our home.  A member of the Rainbow Kids team told me that pnuemonia was often called an old man's best friend.  Meaning it helped him leave this life.  She then said it can also be the best friend of younger people, too.  I firmly told her, "That's fine, but it's not for Aaron, not now."  I know she was trying to help, but it didn't.  If it's an old man's best friend, I think it's the worst enemy of a mom with a medically fragile child.

As I was thinking about Sophia and her mom, I thought of how different the pain of grief can be.  Obviously, I haven't yet experienced what she and so many other moms have.  But I did have the experience of carrying a baby that we weren't sure if we would ever hold alive in this world.  That grief was immense.  Every day, I wondered if that was the day his kicks would stop.  Every night I went to bed praying that I would feel him again, and that if it was going to be the last time I felt him, I would remember it.

When a woman is in labor, it's common perception that she can say and do no wrong.  The pain is so incredible, that she is supposed to be forgiven anything.  You just understand that she's not in her right mind.  Why is it that we don't understand that about grief?  I would think that pain would be so much worse.  And so much longer lasting.  But after a period of time, a few days, a week or two, maybe a year, so many expect you to be back to "normal".   But losing a child changes you.  If it's true that in becoming a mother, you allow your heart to go walking around in another body, how do you reconcile to that heart being stilled?

We chose not to say anything about Aaron's condition to anyone outside of family and a few close friends who were in unique situations to offer comfort and advice.  The main reason?  I knew I was not able to deal with other people's comments and questions.  I didn't want to have to stand there and listen to well-meaning but cliche ideas and smile and thank them.  Moreover, I didn't think many would understand if I turned and walked away, especially if I preceded it with a cutting remark of my own.  We simply had too much to deal with with our own emotions to have to worry about someone else. 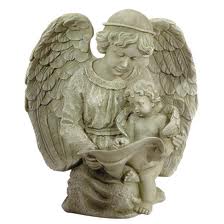 My visiting teacher, upon finding out and learning why we hadn't told people, asked me to tell her what it was she should not say so as not to cause me more pain.  I couldn't tell her.  The thing is, my reaction is based on what is said, who says it, and mostly, my own emotions at the time.  There are no magic words to make the pain better.  There is no magic wand to heal the hurt.  What helps at one time, can hurt at another.  And while I've said I was grateful for his perfect spirit, and so have family members and close friends, when a woman I had just met told me that our family was so blessed to have this celestial spirit in our lives, I wanted to slap her and scream "shut up".  Because at the time, my little one-week-old baby was balancing on the edge in a NICU, and I wasn't with him.

So what do you say to someone who has lost a child?  I'm really not sure.  The pain, and the journey is so individual.  And you don't get to draw a straight line from point A to point B and say, "I'm here right now and I'll be done when I get there."  It takes a circutous route, full of detours and bumps and washed out bridges.  A smell, a sound can take you back to the beginning, like being bumped back to starting line in a game.  "I'm sorry" is the only thing I can come up with that is always good, and so are hugs.  Beyond that, I think you have to let the Holy Spirit guide you.  Because only God knows where each person is in their journey.

Sunday, November 20:  I'm thankful for Sunday afternoon naps, and a wonderful 15 year old who watched over Aaron so I could ignore the alarms for a couple hours.  Take that, migraine!

Monday, November 21:  I'm thankful for my warm, dry house when it's so dismal and wet outside.
Posted by CompatibleWithJoy at 7:47 AM