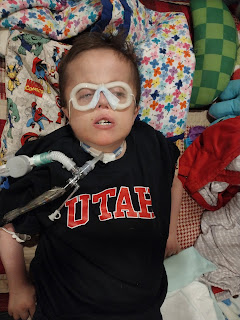 Aaron had a rough year.  Autonomic storming started right about a year ago, but it took almost dying in February for any of us to realize what was happening.  That also led to some increased seizure activity and contractures in his ankles and feet, all of which meant adding in more meds.

And then in November, his gut went on strike. He started having issues back in August, but they really came to a head when he developed an ileus, which is where the gut muscles decide they're not interested in doing their job.  Usually that takes 48-72 hours to resolve.  Two to three days. My little overachiever decided three weeks was a better timeline.  Sigh...

In addition, I've had some of my own health challenges with my gallbladder and some other gastric "fun".  Plus apparently, I have mild to moderate sleep apnea.  I think maybe what I have is just plain ol' no sleep, but whatever.

However, 2022 also brought some good things. We discovered in February (just before he tried to die) that Aaron had a hole between his artery and vein in his right groin area. Fixing that in September did amazing things for his circulation and his heart. He had a heart cath in July that relieved some of the pressure on his heart and lungs by widening his PDA.  He got a new ventilator the end of July that has been a complete game changer!  I mean, we've been tolerating sats down to 77% because on the other vent we were running 6-10 liters of oxygen just to get to 77%.  Now he's usually on 2-4 liters and in the mid to high 80's and sometimes even low 90's! Like I said, game changer.

In fact, those three:  his heart cath, surgery and new vent,  probably are the reason he is still with us today.  Tender mercies.

I've been able to keep up in school, somehow, through all of this.  I love my program, although it demands an incredible amount of emotional energy and introspection.  I've learned a lot about myself, including that I can do things I never thought I could.  If you'd told me I could go without eating sugar for 15 weeks,  I'd have thought you'd lost your mind! But I did, and if I could do that, I can also do other things I'd never dreamed of.

This year is already bringing some challenges.  We no longer have any night nursing and I don't know how long that will last. Our last agency discharged us while we were in the hospital and the story is that it's too hard for them to work around our hospitalizations and they don't have staffing for us.  They did contact a friend of mine and offer her staffing the end of December so that's odd.  I don't know the real story is, but in the end, it really doesn't matter.  Long and short is that we don't have anyone at night for Aaron.  He does still have school nursing though.

So I am now sleeping in the office on a mattress across from Aaron's room. I've slept in my own bed a grand total of six times since November 29th.  But we're making it work. I've revamped his medication schedule so I can get about a six-hour block of sleep (if everything goes right) and I think he may be doing better, too, without being given meds, etc during the night.  So that's a positive.

But honestly, I'm praying (really, it's a matter of daily prayer for me) that I'll be given the strength I need to do what needs to be done.  I'm glad I didn't know what 2022 (and 2023 so far) would bring before I went back to school, because I probably wouldn't have done it.  But here I am, almost done and it has been a really good experience.

In the Book of Mormon, (Mosiah 24) there is a people that's been enslaved that pleads for deliverance.  Instead of being freed, God strengthens them so that their burdens become light. I know He does help us and I'm grateful for all the strength our family and I have been given over the past almost 13 years.  But now, these latest challenges, they seem even bigger and more insurmountable.  So I'm praying for strength to be able to do my schoolwork, care for Aaron, and still take care of everything and everyone else here at home.  I'll need His intervention and help.  But then, I think I always have needed it. Fortunately, He's always been there.

God understands our prayers
even when we can't find the words to say them.
~Author unknown
Posted by CompatibleWithJoy at 8:11 PM