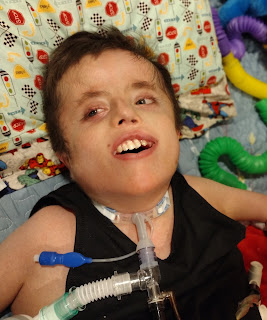 I've wanted to write this for a couple weeks but was worried about jinxing things.

He doesn't nap much at all, as opposed to taking three or four (or more) naps per day.

His smiles are back.  So are some laughs.

I think we've finally figured out a good combination of GI meds/food/activity/other meds. 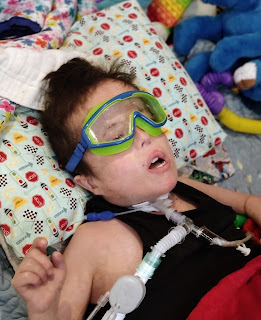 He sleeps with swim goggles on to help his eyes not dry out as much and the eye surgeon feels that the drainage is a natural reaction to the irritation caused by sleeping with his eyes open, and not an infection.

His right ear did rupture again! so we're treating that, but otherwise, I've pulled seven doses of medication off his daily schedule.  That's a lot!  He does still get 46 doses/day.  But even removing those seven (eliminated two meds entirely and reduced another from three to one dose) is a big deal.

And it's making all the difference.

We still don't have night nursing except for the occasional time when one of my school nurses also works a night shift.  Last weekend, Michael had a couple wrestling friends come over and they rearranged my office furniture so I could put a bed in here.  Aaron actually seems to be doing better with the longer block of dark, no fussing with him, no meds time.  We're making it work.  I'm building the routine so that I don't have to think through every step every morning.  We're doing it.

School has started again for me, and there's a lot going on there.  When I stop to think about everything, I get overwhelmed.  Sometimes I'm overwhelmed even when I'm not thinking about it. But I'm trusting in God that He will see me, see us, through this.

This week I got tired of listening to the news and switched to a favorite artist, The Piano Guys.  They play a medley of "Fight Song/Amazing Grace" which really speaks to me.  This is my fight, but only with Him by my side.

This is my fight song,
Take back my life song,
Prove I'm alright song

Through many dangers, toils and snares
I have already come,
'Tis grace has brought me safe thus far
And grace will lead me home.

Cause I've still got a lot of fight left in me.

The Lord has promised good to me
His word my hope secures;
He will my shield and portion be,
As long as life endures.

And then, because that wasn't enough, a couple songs later "Okay" came on.  That has been MY song for years.

And there is a battle raging in your heart but you must winIt comes for all of us, saying we are not enough.So fight for your life! The world's gonna tryTo sell you some lies

No matter what you've been through, here you are!
No matter if you think you're falling apart
It's gonna be OKAY! 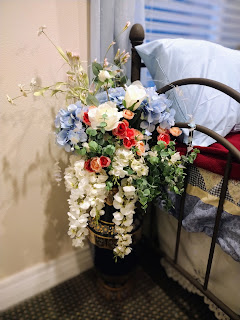 I turned that song up, way up,  and sang along, through the tears that somehow surprised me.  It is okay.  It will be okay.  And it will be a very good okay.  Seriously, try the link.  Hear the song. Believe in yourself!  Because we are enough.  We've all been through hell of one form or another, and we're still here, kicking it, falling apart, and then moving on again.  Sometimes happy, sometimes sad, sometimes beyond devastated and broken.  But still trying, running, walking, crawling.  Whatever it takes.

"I can do all things through Christ which strengtheneth me."
Philippians 4:13
Posted by CompatibleWithJoy at 11:48 AM