Still Got Work To Do 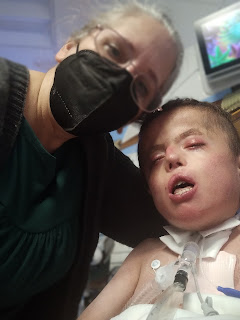 He is reaching his 24 hour feeding goal, but we're just getting there.  It's kinda been fits and starts.  Next will be to try to condense it down to daytime feeding and then individual meals.

He finished his week of IV antibiotics on Wednesday.  Thursday his body, or at least the bacteria, said, "wait, I'm not done.  I'm still here and kicking."

We discovered that on Thursday evening, night, and early Friday morning.

You know how when you do (I don't do) cardio exercises the goal is to get your heart rate up?  Um, not supposed to happen when sleeping.  He was at 120's in the evening, progressed to about 150 beats per minute at midnight, and then at 1:30 am he decided to go all out and hit 170.  Asleep.  Not so great.

So once again, a rapid responses was sent out.  Fortunately this time, the team came up, evaluated him, pulled labs and did x-rays, and decided he didn't need to make the trek downstairs.  They did restart IV antibiotics again and we pulled more cultures.

So now his ear, his eye, and probably his trachea are all infected and they figure he needs another week.  We even did a CT scan to get a really good look at his ears, and yep, still got "stuff" in there.  Our new discharge goal is for Saturday. 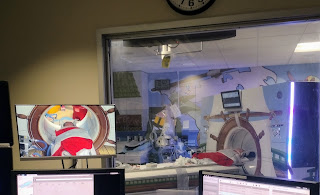 In the meantime, he's tired, so tired.  Labs also showed that his hemoglobin and hematocrit are both pretty low.  They were on the low end of normal when we were admitted but they've dropped quite a bit since then.  So we're having the discussion about whether to start iron or transfuse, or what.  Hemodynamically (blood volume, profusion, blood pressures, oxygenation) he's looking pretty good so there's concern about upsetting the apple cart by putting more volume in.  But at the same time, his bone marrow isn't currently putting out the cells it's supposed to be.

Which, incidentally, can influence the gut response.  Remember the old gospel song, "Dem Bones"?  Yeah, it's all interconnected.  Ear, eye, and trachea.  Blood, oxygen levels and everything.  Sigh...

So anyway, that's where we are.

On another note, I'm done with finals and have a few more hours I need to put in at my internship this week.  Then I have a break before next semester comes at me.  Last one!

In the meantime, we'll just keep on working on getting things sorted out.

"Every noble work is at first impossible."
Thomas Carlyle
Posted by CompatibleWithJoy at 7:10 PM