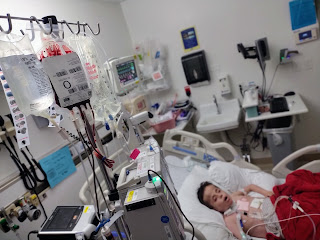 You know that movie, Groundhog Day?  Where the day just keeps starting over again?  Bill Murray can't quite figure out how to get out of the loop?  Yeah....

I did put up a Facebook post a couple days ago but honestly, recapping that wouldn't give any new info.  I mean, Groundhog Day.

We start his feeds slow, work our way up sloooowly, and then hit a roadblock.  Usually it's a spiking fever, higher heart rate, lower sats, or a combination of the three.  Plus his girth goes up substantially. Yeah, they measure his tummy pretty often.  So then we have to stop giving him anything through his g-tube.

What we know: his white blood count (infection fighting blood cells) trend up when he struggles. He fevers, sometimes as high as 104.7 (YIKES!). He gets more tired. His red blood cells, his hemoglobin (part of the red blood cells that carries oxygen) and hematocrit (percentage of red blood cells available) have all been trending downward.  Interesting and maybe pertinent, his thyroid levels are actually high instead of low or normal like usual.  And he's not tolerating food in his belly/intestines/gut/whatever.

So after being pretty sure we've knocked out whatever bad bacteria there is with two weeks of big gun IV antibiotics, and trying most everything else, he's now getting blood.  His cardio really likes all those red blood cell markers to not just be in the normal range, but at the upper end because of his heart issues.  Somewhat of concern is that vitals wise, he's looked pretty good so we didn't want to upset the hemodynamic balance.  The conclusion we all reached together is that at this point, the possible benefit outweighs the risks.

So here's hoping that bag is a bunch of red pixie dust running into his veins.  He's responded well to it in the past.  And right now he's already looking a little more pink.

Maybe we've found our magic ticket out of our loop?

When the world says, "Give up," Hope whispers, "Try it one more time."
~Author unknown
Posted by CompatibleWithJoy at 8:01 PM