Activity at 2 AM is Never Good. 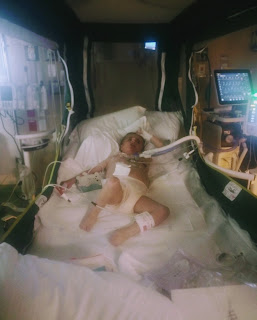 I don't know what happened.

The team doesn't really either.

But I woke up with all the lights on and a room full of people.

Aaron had dropped his sats precipitously.

So when I woke, the whole rapid response team was there.  Apparently he'd dropped, they were bagging.  It wasn't working.  Like he was on 100% oxygen through the bag and he really didn't want to come out of the low 60's.

I don't know how many people were in the room, but it was a lot!  They didn't want to try to move him until the attending was also present.  I don't think they usually come up for rapid responses, but she came, too.  They gave Ativan through his IV with epinephrine on standby in case his blood pressures tanked.  I was asked about compressions, and responded automatically that he was "full code."  I wasn't processing, and didn't want to either.

We made it downstairs, and they moved fast once they started moving the bed.  In the middle of this whole mess, he created a mess in his diaper (and everywhere else, TMI?).  Honestly, it was his first stool on his own for a week, and the first one he'd had here.

Prior to all of this going down, we'd tried to run Pedialyte really slow (10ml/hr) overnight Thursday to Friday to wake up his bowels, but he didn't like that so it was stopped Friday morning.  He usually loves vest treatment, but didn't tolerate it at all during the day, so that was stopped after just a few minutes each time and then put on hold after two failures.

This poor kid.  His belly really HURTS!!  He's had another BM today, but he's spiking another fever and he's crying most of the time.

He has come down on his oxygen needs.  He was on 100% on the ICU vent when he was finally stabilized, and now he's on 65%.  That's progress.  But he's still requiring IV Tylenol and Ativan to be comfortable.

Yesterday in my advanced therapy class, we had to conduct a (short) clinical session in front of the class.  Because you have to have a client, we were each other's guinea pigs.  My partner asked me if we could keep things "real."  In other words, not role play.  She did with her issues and I think it went okay.  Between her request and some comments that had been made in Addictions about honesty and trust, I decided to be open about what I'm dealing with.  I think I've felt the need to protect others.  I feel like I'm too scary, this is too hard, and I don't want to burden others.  In Addictions, we talked about how the client has to be able to trust the therapist to deal with the horrific things that they deal with in order to heal.  So, yeah...

Anyway, after unloading on K, she asked me what I wanted to do with the (very few) minutes we had left.  Did I want to work on come skills to get through things, or explore the emotions? I quipped that the skills were probably easier, but the emotions were more needed, so she walked me through some somatic exercises.

We talked about what I was feeling, where it was, how it felt, looked, and just let it "be."  This big black knobby mass that sits in my own chest, on my lungs.  And then she asked what it was saying to me.  As I pondered that, I started crying (I'm tearing up just remembering).  I've said this to so many, but I try to stay busy and push it away myself.

I needed this so badly, and it was before all the crap hit the fan last night.

Linnaea sat on my lap for my livestream class yesterday, waving at all my other classmates on the screen.

"Those are all your friends, Gramma!"

Yes, Linnaea, they are my friends.  And I am so grateful for them.  They help me know myself and give me strength.

One's friends are that part of the human race with which one can be human.
~George Santayana
Posted by CompatibleWithJoy at 11:29 AM