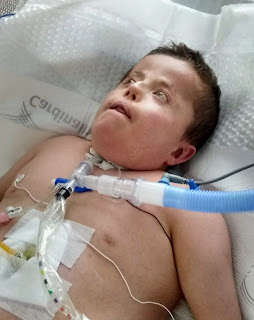 Just kinda a down and dirty quick update.

He’s still running a fever most afternoons (I think we “skipped” his fever on Monday, that’s all) although it’s much lower.  It usually stays below 101.   He’s a little more playful, but sleeps most of the time and isn’t super interactive when he’s awake.  He is back on his home vent (as opposed to the PICU vent) although at much higher oxygen flow.

His labs are a bit wonky as well.  They’re trying to balance his electrolytes as his sodium can’t make up it’s mind where it needs to be, and it also wants to be lower than we want it to be.  Fortunately, he has a deep IV that we’re able to draw labs from, so at least he doesn’t have to be poked multiple times a day.

Long and short:  I don’t know when we’re coming home.  It’s been a long time (almost 2 years) since we had a stay longer than a couple days, so I guess we were due.  It’s harder since I have to go home most evenings to work and then drive back up in the wee hours of the morning.  (By the way, did you know freeways around here are pretty much empty at 3 am?  Like on Tuesday morning, I was almost to downtown Salt Lake before I saw any cars, and then it was just a handful.)

But I’m grateful we still have a reason to need to be in the hospital.  I’m grateful it’s not behind us forever.  There’s only one way for that to happen, and I’m not going there right now.  So we’ll keep plugging away.  I brought his favorite movie (Peter Rabbit) up and we’ll put it on when he wakes up.  He’ll sit in his wheelchair and even maybe throw pies at his brothers on his computer.  It’s just going to take more time... (Too bad mom is not the patient sort.)

Who forces time is pushed back by time; who yields to time finds time on his side.
~The Talmud

Posted by CompatibleWithJoy at 12:51 PM