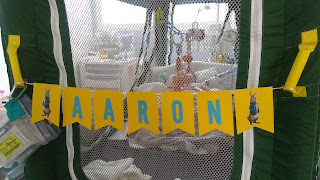 There’s progress.  It’s slow.  It almost feels glacier-ly slow. (Is that a word?  You know what I mean.) But it is there.

It’s hard to update when I feel like there’s almost nothing to say.  But his fevers are trending lower.  Yesterday he woke up without one, and when it did go up, it wasn’t higher than 101, and it responded fairly well to Tylenol.  Given his heart and respiratory rate, he’s going to have another one today.  You can see it coming.

He does have a lot of bruising.  When he gets a virus, his platelets drop significantly, so as he moves, as we move him, as they do blood draws, etc, the tiny blood vessels beneath his skin break.  It’s not nearly enough for them to be super worried, but they are watching his labs.

He is still soooo very tired.  But he played for about 15 minutes yesterday before going back to sleep.  It’s not much, it was so short, but he did play.  Before, he would sometimes hit his toys, mostly by accident, or just here and there.  Yesterday mid-day, he was purposfully grabbing and whacking them, and then he was gone again.

When he does desat, he’s not turning ugly colors (as much) as he was before.  He’s still dropping into the 60’s and taking time to recover, but we’re not bagging him, and his color stays (sorta) normal.  We might even need to put clothes back on him soon to keep him from pulling at his g-tube and the leads they put on him to watch his heart rate and rhythm.  But so far, he’s still too tired to really do much with those.

So there’s that. Not much else.  Child Life made him a cute name banner with Peter Rabbit stickers.  That is his FAVORITE movie.  90% of the time he chooses it.  Good thing it’s got awesome lines ‘cause I think everyone in the house can pretty much quote it verbatim. 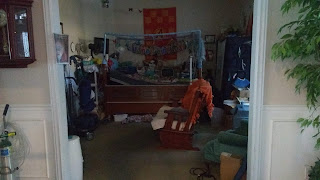 I’ve been able to go home and work the last three days as he’s gotten more stable.  It’s weird, odd, and not a little discomforting to look across the entry into his room and see it dark, hear the silence where we usually have machines humming away.  I’m anxious for the day that it’s lit up with lights and machines and a silly boy moving and shaking in there again.  It’s too quiet.

“It does not matter how slowly you go so long as you do not stop.”
Confucius

Posted by CompatibleWithJoy at 11:21 AM