To Fight the Unbeatable Foe 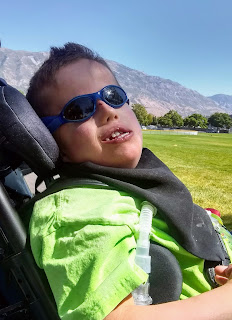 Some battles can't be won.  Some foes can't be beat.  But we have to fight anyway.

We've had a rough couple weeks, and now the pain is between my ears.

It's his heart, again, still, always. and there's not a lot we can do.

Aaron was doing well, quite well, and then he wasn't.

He's also gained quite a bit of weight, almost 6 pounds since mid-May, and only grown about half an inch.  All in all, not good signs, and then we add in significantly increased oxygen needs, lungs sounding okay (for him) and no sign of illness.

Over the past two weeks, it's gotten worse.  We've had to use his emergency tank, a lot of albuterol, and bag him kinda often.  We do have a couple new nurses, and maybe this is just his way of breaking them in, but seriously, he doesn't need to break them as well. 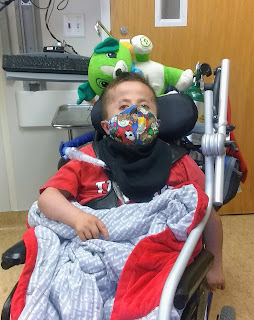 It's been rough. He was off school on Monday for the holiday and I kept him home Tuesday and Wednesday.  Wednesday was actually a good day, finally, but it didn't last.  Wednesday evening it was too much.  Once again, bagging and low sats so I gave up and we went in.

In the emergency room, his viral panel was negative and his x-rays looked like they always do.  But his heart numbers, well, they were worse. We have a tiny bit of room to move up on some of his heart meds, but not a lot.  As we went over his nutrition, it appears that he's getting too much free water, so we've revamped that as well.

All in all, other than trying to redo his food and bump a couple meds, we can't do anything.  And he's not sick, so it's not like we're hoping things improve.  We have added another (yes, another) machine, a cough assist which will help clear his lungs and maybe help that way.

And we came home about 48 hours later because, as I said, there's not much that can be done. 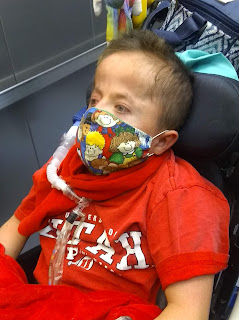 But the reality is, he's getting worse.  It's still pretty slow, but it's clear and noticeable.

His doctor said we're probably going to have to accept still lower sats.  I remember when he would drop below 90% and we would go in.  Then it was 85, now it's 80%.  I told Dr. D that when we drop into the low 70's, he gets ugly colors.  He agreed, it isn't pretty to see someone that cyanotic, but some kids still handle it.  And yeah, he probably will.  I don't know if I will.  Especially since I know that it will just continue.

And I find myself feeling a bit like Don Quijote.  It's an impossible fight, I'm tilting at windmills, except they really are monsters, and they are turning me on my head.  But I can't stay down because the fight goes on.  And fight I must because he does.

It's been ten years, 122 months (today) since he was born and his clock started ticking on this earth.  In reality, they told us that day might never come itself, and somehow in my naivete, I thought four months would be enough, I would be happy if he could live four months.  I was wrong, so wrong.  It's been more than 30 times that and it's not enough.

So this is my quest, to follow that star, No matter how hopeless, no matter how far . . . To be willing to march into Hell for a Heavenly cause.

Because sometimes it is Hell, to hold your child, to administer treatments that he hates but endures without complaint, to know that he will be taken from you, far too early, no matter how far away that is.

So we'll keep making memories, having fun, getting out when it's safe. 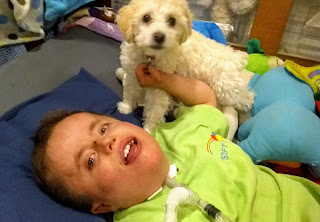 And I'll keep fighting, I will be true to this quest, this calling.  I will keep working, praying, learning and trying, because he deserves it.  He deserves my best efforts, and I pray that when that day does come, I will know that I have done what I can. Because I know that the world is better for Aaron being here, my family is better for his life, and I am better as well.

This is my quest, to follow that star ...
No matter how hopeless, no matter how far ...
To fight for the right, without question or pause ...
To be willing to march into Hell, for a Heavenly cause
The Impossible Dream
Posted by CompatibleWithJoy at 9:37 PM