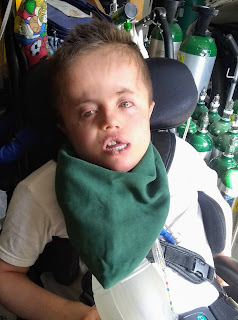 And then there's this week. Here's how things went down.

Aaron had a really good start to the week but then started getting sick. I didn't realize it at first because the only sign was that he was more tired. The med changes should have made it easier for him, given more energy, but he doesn't always work with the plan, so maybe? But I hadn't gotten around to looking things up yet.

And then a low grade fever began Friday and he needed  more O2 and really started struggling. We did what we could, Tylenol and Motrin, increased breathing treatments, and tried to figure out if/when he would have been in contact with someone sick. (You know Covid was front and center in my mind, and my fears.)

Anyway, we made it through Saturday and my first swing shift for work but he was pretty much maxed out on what we could offer. So late Sunday morning we loaded up and came up to Primary's.

I called the ER on arrival because if it was somehow Covid I didn't want to bring him in and contaminate everyone and everything. The vent would actually make him a super spreader because it aerosolizes his breaths, although by then he was struggling enough that he was on a bag instead of the vent anyway.

So here we were with fevers that we were treating with both Tylenol and Motrin, piggybacking them, some minimal secretions, and a very sad little boy. 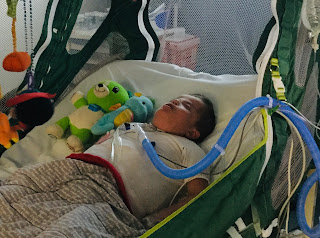 It turns out he's got rhino and pneumonia, but not Covid (thank heavens!).  So we'll be here for a little while until he is better, hopefully not too long. I'll still need to work so I'll have to go home for that Mon, Tues, Thurs, Fri & Sat. But he'll get through this.

And that frustrating, discouraging hospital stay 12 days ago? Well, I'm seeing that a bit differently. See, both times we came up with higher oxygen needs and struggling, but the first time he was also heathy. Those changes last week made all the difference in his ability to endure and hopefully fight off this illness.  What I saw as a setback turned out to be a blessing.

Posted by CompatibleWithJoy at 10:43 AM