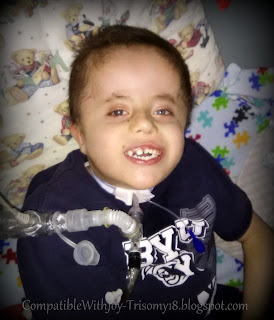 I'm not quite sure where to take this.  (I know, you've heard that before.)

This week has been quiet (relatively speaking) on the homefront.  Aaron is home, yes, still.  (Big grins.)  It's been over three months since his last discharge.  William told me not to say that, why did I have to say that??  But it's true!  And it's worth noting and celebrating.  While it's not our longest break (yet), it's been quite a while since we've gone that long without a stay at the "hotel on the hill."

But there's a lot that goes into keeping him here, safe and happy.  And with all the noise about cuts and changes, well, this mama is a little bit nervous.  See, it's exactly the kind of support that is being scrutinized that makes his life possible.

Yes, there used to be (not long ago) pre-existing condition exclusions and lifetime caps.  And most of us really didn't give it a lot of thought.  Well, maybe the pre-existing conditions, but who was ever going to need a million dollars worth of coverage in their lifetime?  Frankly, anyone dealing with a major illness or injury.  Lifeflight can cost $12,000 to $25,000, and that's before you even get to the hospital.

There, an average ICU stay is a minimum of $10,000 a day.  That doesn't include any surgery, specialists (and yes, if a specialist looks in on you, that's a charge) or that type of thing.  If you're really critical, it's more.  There's the OR time, anesthesiologist, surgeon, assistant surgeon (yes, they bill separately) and so on.  Then there's the follow-up after discharge, any special equipment, medication, etc. 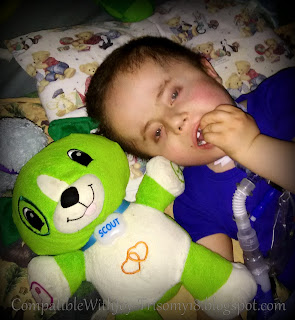 So if you end up with a few broken bones, an appendectomy, the run of the mill type of things, well, you're probably still safe.  But now throw in a premature baby, cancer, any really bad car accident or skiing accident, and you'd better worry.

Our last hospital stay, you know the one where I worked the phones so hard to get out of there sooner rather than later, well, that was a cool $100,000.  Yes, that's five zeros.  And we spent no time in the ICU.

Here at home, I do most of his cares.  Just yesterday, I spent an hour drawing up his inhaled meds and cutting the ones he takes half a time so I wouldn't have to do that while I was also working.  But he's got equipment that we will never own, no matter how long we use it.  Ventilators and oxygen concentrators are rented because then the company maintains them.  He takes between 27 and 31 doses (depending on the month) of 18 different medications or vitamins per day.  And yes, we've occasionally tried to wean him off of some of them.  It's not pretty.

This kid is expensive, with a capital E.  And thank heavens for a Medicaid waiver that helps provide for him.  It doesn't cover everything, but most of it.  It also covers his nursing.  Some states, many states, would cover him at 20 to 24 hours per day given all his medications, therapies, and interventions.  Because of recent additions to his medications, he now qualifies for ten hours a day, up from eight.  And you know, that's okay.  We can totally make that work.  I'm substitute teaching now, so I'm at work while he's at school, and he's got a nurse for that, and then we have our nighttime hours covered. 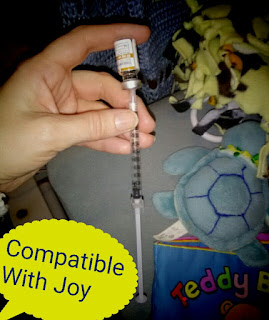 But without nursing at night, I'm not sure what we would do.  We were without coverage for eight nights this past month and it was hard, really hard.  See, among those 27-31 doses, he gets ten between the hours of 2:00 am and 5:00 am, plus a shake vest therapy.  Trust me, working a full day on either side of those nights wasn't pretty.  (And I wonder why my headaches are back?)

But here's the thing:  Aaron has worth, tremendous worth.  Just by himself, his soul has value.  And I don't think you can put a price on it.  This child, this very handicapped, limited boy, has been an influence for good for people around the world.

In the beginning, it was just our family and a few close trusted friends.  It was so raw, so painful, so incredibly heartbreaking, but it drew us together.  We rallied around this tiny unborn child and put aside our selfishness, strengthened each other, called upon God for hope.

Then he was born and word trickled out to the community, our local community, and he inspired others here.  As I reached out for support and wrote about him and our journey, others were touched.  I initially wrote on a Carepages website and titled his page "Gift From Heaven."  We outgrew that site when he was about nine months old and I started this blog.  In the past almost six years, the blog has reached I think nearly every single country in the world and has had almost half a million hits, over 16,000 in December alone.

So not only does he have worth just by virtue of his "being," he has influenced countless others. He gives hope, joy, inspiration.  And in my view, that is exactly what this world needs, someone to inspire us to be our better selves, to give to others, to smile more, love more, remember faults less and to try harder.

And Aaron?  What does he think?  Well, he just keeps on going.  This week while I was drawing up one of his medications with a needle, he reached up and hit it and sent it flying, and then laughed at me.  No, he doesn't get injections, so it wasn't going to hurt.  He was just playing and thought it was funny.

He's recently discovered his right foot.  Up until now, he's always worn socks.  For him, that's a comfort measure.  Most of the time his IVs are placed in his feet.  So if he wasn't barefoot, there was no chance for an ouchie.  But he's taking his sock off now, over and over.  And it's pretty fun.

He's been at school, where he's hit all of his IEP goals for the year, which means he'll only be in summer school two half days a week, and that for socialization.  And he still thinks that the ideal sleeping hours are 2 am to noon, just like some of his siblings.

He loves his life.  He lives it to the fullest of his ability.  And he deserves to have it supported.


A great soul, with a great purpose, can make a weak body strong and keep it so...
~Mark Twain


Posted by CompatibleWithJoy at 7:10 PM