Thrown For A (Promising) Loop 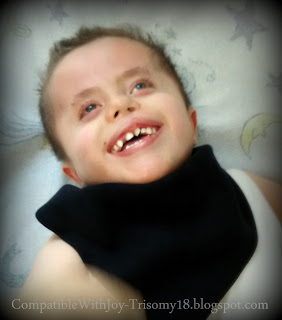 I'm sorry for not updating sooner, especially after last Sunday's post, but I've been working full-time and also trying to process my thoughts.

See, last Sunday, along with everything else I wrote about, I was revisiting the (very incomplete) funeral plans I've thought about off and on for almost seven years now.  It's less than a month until the seven year mark from when we were told our baby was not likely to ever live, ever at all.  That coupled with all the challenges we've had with his oxygen brought it all back to the forefront of my mind, and I was reviewing what I do have.  Vague plans, some ideas, but yeah, they're written down.  Some may think that's morbid.  Really, it's just our reality.

Anyway, so we had our cardiology appointment on Tuesday, and I will freely admit, I wasn't looking forward to it.  I mean, if it didn't happen, they couldn't tell me bad news, right?  But we went anyway, just not real thrilled to be there.

"So how about setting up a heart cath to see what needs to happen to make him a surgical candidate?"

I didn't think that could ever happen.  But Dr. D. thinks that if we do a two-step process, it might be an option.  There are a TON of challenges and complications, and that's IF his pressures are determined to be safe enough.  It's two heart surgeries, several months (at least) apart, and the second is open heart.  It's risky for a typical kid (yeah, there are typical kids born with holes, too).  It's exponentially more risky for him.

First they would go in and put a band on his pulmonary artery to restrict the amount of blood that is allowed through to his lungs.  Right now, the lungs get way too much, which causes them to stiffen, yeah, pulmonary hypertension.  This would decrease that.  Then, when the pressures drop enough, they'd go in and close the hole in the lower chambers of his heart.

See, the meds he takes do a (somewhat) decent job of mitigating his pressures, but the VSD (hole in the lower chambers) is the cause of it.  As long as we treat symptoms but not cause, it's going to get worse.

On the other hand, if we do nothing, it progresses.  But according to Dr. D, baring anything else (and there are a TON of "elses") with his pressures increasing, he could live into his 20's.  Seriously??  20's???  The oldest living boys I've heard of with full T18 both died at either 18 or 21 (differing accounts).  When I pointed out that each med had only bought us three years and we were out of options, he said that was only three years with sats in the high 80's, low 90's.  But what would happen is that his sats would slowly, slowly drift down until they could no longer sustain life, but that was still many, many years off.

Now, like I said, there are a lot of other "elses."  Plugs, viruses, other illnesses, they all can and do rear their ugly heads.  In the past week, two young men who are local to me lost their lives to viruses, and then there was my friend's daughter just before Christmas.  Like I said, it's our reality.

But to go from revisiting and revising funeral plans to being told that he could be expected to live for another 15+ years, or even longer if he could have and tolerate the surgery?  Well, it's a little mind bending.

In other news, he's done pretty well this week.  He did come home from school early on Friday because he was having tummy trouble, but he's recovered well from that.  Earlier this week when we didn't have a nurse, he actually slept all night.  Of course, on Thursday after I'd worked all day and had another full day's assignment on Friday, he chose not to sleep.  Oh well.  I've kept him up and out of bed today in hopes that tonight (nurse-less again) he'll cooperate.  If not, I guess I'll sneak in a nap.  Since I'm subbing now and there's no school tomorrow, I won't be working.  Either way, we'll make it work.  And, heaven willing, look forward to making it work for a long time.

Always look on the bright side of life.
Otherwise it'll be too dark to read.
~Author unknown
Posted by CompatibleWithJoy at 8:14 PM