How to Extend Christmas Break 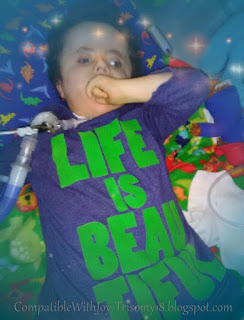 Christmas has come and gone and so has the New Year's Day.  All the decorations were put away, and (eventually) all the regular stuff brought out again.  (I had a sign that goes over the front door go AWOL for a while.)

And Aaron decided that he hadn't had enough time off of school.  He came down with what looks like a tummy bug Sunday night.  I'm grateful that's all it was, because the way he was acting, I was hoping it wasn't influenza.  (And YES, he had his shot, back in September.)

He spent most of the night and into the morning Monday throwing up, or at least trying to.  Because of a surgery he had at four months, he actually can't throw up.  We have to open his g-tube extension and vent it to relieve the pressure.  But he can and did retch, and the food I gave him at 11 p.m. was still in his stomach at 5 a.m. (TMI?  Sorry.)

And then the diapers, and the low grade fever, and just being miserable.  Plus the oxygen, and more oxygen, and some more on top of that, just for fun.

I started running Pedialyte in hopes of maintaining his hydration and threw on a bunch of breathing treatments.  With this kid, anything that is a problem also causes problems for his breathing, and I mean anything at all.

I'm grateful for our big M-90 oxygen tanks.  The concentrator just wasn't cutting it for most of the time.  He was needing 12 to 15 liters of oxygen through his vent, and twice during the day, once in the morning and again in the early evening, that wasn't enough either.  We had to bag him on eight liters just to maintain his sats.  In other words, our home ICU was up and running.

But once we got through the morning (and gave Tylenol) he was happy, so happy.  I mean, does this kid look sick to you?  And I had a hard time justifying taking him to the hospital as long as I could bring him back into where I could maintain him.  I mean, for a virus, all they can do up there is support him, and if I can provide the needed support here, so much the better for everyone.

But yeah, it did get him out of school for today.  All the others are gone.  Deborah's moved out, Mary, David and Jonathan have gone back to college (even though they don't start class until next week).  And of course Matthew is in Canada.  Joseph, Andrew, Michael and Aaron are the only ones left at home.  I know for some that seems like a crowd.  Here it seems pretty quiet.

But not too quiet, for which I'm grateful.

Sanity may be madness but the maddest of all is to see life as it is and not as it should be.
~Don Quixote


Posted by CompatibleWithJoy at 12:10 PM