It's been a couple of days, and through process of elimination, we might have some answers.

See, if it's his gut, that's all well and good (actually very good), but if the correlation doesn't equal the causation, we might be missing some really big issues.  Thus the testing.

First off they did abdominal ultrasounds to look for tumors.  Yeah, cancer, the big C.  When I brought up in rounds on Thursday morning that kiddos with T18 are more prone than the general population to kidney and liver cancers, the attending's eyebrows went up.  He was supposed to say there was no connection  Um, nope.  He said there could be, and it could be missed on exam or x-rays if they were towards his back.  Not so reassuring.  However, when they imaged him, the didn't see anything.  BIG sigh of relief.

Then they scheduled him for a CT scan of the lungs, looking for scarring or other things that would cause his high oxygen needs.  It's kinda confusing to read the results, but it looks like the long and short of it is there isn't scarring but his stiff pulmonary arteries (tubes that carry the blood from the heart to the lungs) are bigger and stiffer and are squishing his lungs a bit.  (Squishing, nice medical term, huh?  I came up with that.)  On the right side, it's actually compressing the right main airway pretty significantly, the left side, not so much.  The biggest issue here is that with a more narrowed airway, it's easier to plug and block off.  Have I mentioned lately how much I hate pulmonary hypertension?


Having fun playing with sounds.  Doesn't look sick, does he?

But during all of this, Wednesday afternoon they switched his formula back to what we used to do.  And guess what we were seeing by mid-day Thursday?  Lower oxygen needs.  He was still kind high, but by Friday he was pretty much back into his normal range.  They moved him to the floor and we started working more on his feedings.  Up until Saturday morning, he had been on "continuous feeds."  Those are exactly what they sound like:  constant, very slow feedings.  But that's harder to maintain with a schedule, and it's actually good for the body to have bigger, more spread out feedings.  So mid-day yesterday we consolidated some of them.

Usually, he gets five "bolus" feedings each day over half an hour, and then a slower rate over five hours at night.  Right now, we're working on doing his bolus feeds over an hour and watching to see what he does.  See, they're also still pretty concerned about his heart and that dang pulmonary hypertension (PH).  There's been talk of getting another heart cath, where they insert catheters through his femoral artery and/or vein and measure pressures in his heart.  Obviously that's not without risk. 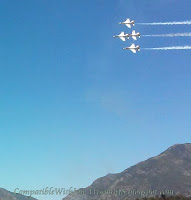 Soooo, if he can maintain good saturations on normal amounts of oxygen through today (and he did yesterday) then we should bust out of here tomorrow.  If he struggles at all, the heart cath goes back on the option board.  Can you guess what I'm hoping for?  I mean, we don't have many more tricks we can pull out of the bag anyway in regards to his PH. 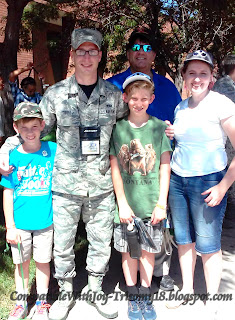 We had also been invited to go to the Warriors Over the Wasatch Airshow with Make A Wish on Friday.  Um, yeah, Aaron wasn't approved for that field trip.  So William brought Mary, Andrew and Michael and picked me up on the way.  Each Make a Wish family was assigned an escort.  Ours was TSgt Derrick Tibbs and he was a wonderful guide!  He's been in aircraft maintenance so he talked airplanes with the boys and was careful to watch for anything that made our visit better.  I miss being on military bases, the courtesy, the attention to detail that seems missing in so many aspects of our lives. 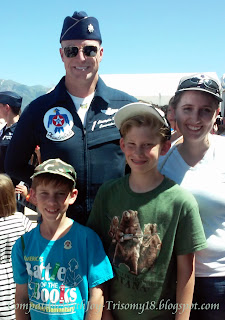 It's been ages since I've watched the Thunderbirds, but I have great memories of watching them, especially at the Air Force Academy when I was in grade school.  They'd fly for graduation and they'd pass over the field between my school and my house.  I swear, it felt like I could reach up and grab a wing.  And I felt like a kid again on Friday watching them. 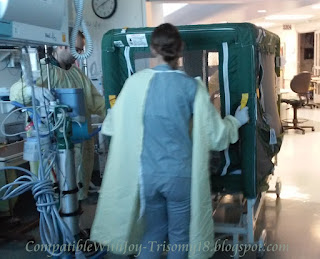 After they flew, the crew came over to the tent where we all were and spent time with the families and kids.  They wanted the Make A Wish kids all in a picture, but since Aaron wasn't there, Michael stood in for him and got his pin which made him an honorary Thunderbird.  When we got back to the hospital, they performed their own stunts and moved us up to the floor.  I put Aaron's pin on him and he had fun playing with his planes, including the F-16.  As much as he's tied to medical stuff and his life revolves around it, he's also a little boy, a kid, and he likes to play.

So very grateful for the many men and women, and their families, who sacrifice so much for our freedom.


From every mountain sideLet Freedom ring.
~Samuel F. Smith, "America"
Posted by CompatibleWithJoy at 11:44 AM