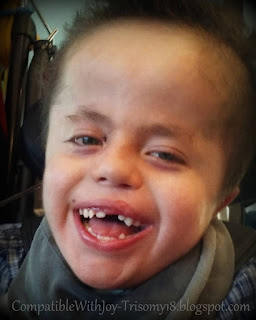 Not sure where this is going.  (I know, you've heard that before.)  But from things I've been told, I get the impression that some people think this medically fragile life is easy, and others feel we're some kind of super family.  Nope, neither one.

I think it's called "extreme parenting."  Is that a "thing?"  I kinda think it's the parents who are required to go to extreme measures to keep a child alive and also enjoying life.  People look at the number of kids we've got, the outings we get Aaron to, and the fact that he's still here and happy when so many, many kids like him have passed on, and wonder how the heck we do it. Yeah, sometimes we wonder, too.

It's not always easy.  In fact, sometimes it's hard.  It certainly requires a ton of planning, but most of the time, we make it work pretty well.  And we need it.  I need it, Aaron needs it, and the rest of the family does, too.  Staying home all the time isn't healthy for anyone.

This past month has been interesting, to say the least.  I'd gotten comfortable with the routine, the meds, the vitals, the alarms (oh, the alarms...).  And then things got changed up.  What is is they say about complacency and change?  Oh, yeah...

We added in vest treatments, 30 minutes of shaking twice a day, not to be done with a full stomach.  It's been the "on" month with inhaled antibiotics, which means about 20 minutes of hands-on medication administration every morning and night in addition to the rest of his cares.

Then there was the whole lovely experience in the hospital where we found out he has decided not to poop.  And that saga continues.  Yep, we thought we had a good routine in place, but not so much.  This past week, unless he's had a suppository, he's quit going again.  I'm throwing so many interventions at this kid, I can't believe he's not swimming in the stuff.  And you know he doesn't like to breathe when that's happening.

So yep, it's real around here.  Last night found me at Wal-Mart, (with half of everyone else in the world!  Good grief! Loooooong lines!) trying to get some pedialite and prune juice to keep this kid home.  Yeah, everyone else is buying chips and hotdogs for barbecues, and I've got a cart with clear liquids and some of the nastiest juice ever made.  I'm telling ya, it's a party.   But hey, I'm getting a little tired of bagging this kid multiple times a day.  Between his digestive issues and his asthma, breathing doesn't seem to be too high on his priority list.  But it is on mine.  You know, kinda like the teenager and the clean room thing.  And yeah, it feels like a similar battle.

So last night we stopped all his food and put him on the prune juice/pedialite.  I pulled out (almost) all the stops on his albuterol.  He's now getting breathing treatments every three hours and he's actually looking pretty good again.  He still hasn't had a dirty diaper and breathing always changes when he wakes up, but I'm back to having a little wiggle room on the oxygen.  So hey, we keep on going.

But just like any other parent, sometimes I want to throw in the towel, and I was there last night.  You get tired of that toddler who won't eat dinner and thinks the living room wall is the canvas for his latest masterpiece, exasperated with the sixth grader who hates practicing the piano, and totally fed up with the teen who can't seem to put anything away.  I think everyone does.

And then we go online with social media and see either the picture perfect vacation or people bashing another parent for an accident or an honest mistake that they're going to feel the repercussions of forever, while the rest of the world forgets them 30 minutes later.

But if we really stop and examine our lives, we see that toddler gives the most amazing, sticky armed hugs with "I love you the mostest, Mommy!" just when we need it.  The sixth grader will make you belly laugh with the silliest pun.  And that teen? Well, he asks what he can do to get dinner going, and then puts it all together.  And you realize that maybe you're actually doing okay with the whole parenting gig.

And you know what?  Real life isn't like we see on social media.  It's messy, it's hard, but it's also really, really good.  That's why we do what we do, we fight for life, for love, for the chance to make our mark on the world.  We figure out how to make things happen. And hopefully, along the way, we have fun and laugh.

And PS:  This isn't a "oh woe is me, life is hard post".  No interventions necessary.  Like I said, just keepin' it real.  You know, therapy.