It Takes a Village (or a Family)

**Warning:  A couple pictures aren't for the squeamish.  They're kinda gross.

They say it takes a village to raise a child.  I think maybe I've got enough family members that we might qualify as our own village.  Not to take away from the many, MANY people who help out.  So grateful for all of them.  But today a kid picked up on something I was totally missing.

We had an early morning soccer game, and it's spring soccer.  It's COLD out!  So Aaron didn't go.  When I got home, there was a low alert alarm going off on the ventilator.  He has three different alarm alerts, low (check me when you get around to it), medium, (probably ought to look sooner rather than later) and high (do it NOW).

It was a high pressure alarm which means that the vent felt like it was having to push harder than it should to get the air in.  Usually we reposition him or suction and all is good.  I passed the catheter and really didn't get much.  And his sats were pretty good, too.  But he was working pretty hard to breathe.  He had some retractions (where the skin sucks in a bit under the ribs) and he just looked like it was hard work.  Plus he was sounding growly, or like he was snoring.

Now, I know anyone whose had any experience with a trach is thinking, "It's a plug, Mom.  Change that thing out!"  But I'm standing there, confused, thinking, wondering what the heck is happening.

Then Andrew asks, "Is he plugged?"

"No, I don't think so, the catheter went down pretty easy."

"Hm, maybe."  Stand there watching and listening for a few more seconds.  "Um, yeah, I think you're right.  Actually, I'm sure of it."

And we start moving, fast.  Because while he's still not desatting, this kid is getting tired, working really, really hard.  And if we don't go fast enough, it could start to turn ugly.

THIS is the reason he has a nurse with him at school and at night.  THIS is why I can't leave him without someone who has been trained.

Yeah, Andrew called it.  Big ol' nasty plug in there. 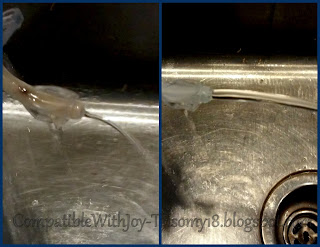 The two streams of water are the same trach, before and after cleaning it.  He's already breathing through a pixie stick, and that mucus plug narrows it so much more.  Instead of water, imagine it being the air he breathes, because yeah, it actually is.


I'm grateful Andrew was thinking and has been paying attention these past few years, because I wasn't.  Grateful for my village.


No man is an island, entire of itself; every man is a piece of the continent.
~John Donne

Posted by CompatibleWithJoy at 11:14 AM