What a difference a week makes.


A week ago, we were sitting in the PICU watching Conference.  Friday, we were on the roof of the Conference Center.  I've told you this can be a rollercoaster.  Right now, we're riding up high.  It's a pretty good view.

The last few spring breaks, William has taken a group of scouts on service trips to various Indian reservations.  Which leaves me and whatever kids can't make the trip at home.  We usually try to plan fun things to do, but sometimes Aaron's version of "fun" is a bit different than the ours.  I also have "projects" I try to get done.

This year was a combination of the two.  We spent the first few days in the hospital and Matthew and Michael held down the fort (or at least didn't blow it up) at home.  We got sprung from the joint on Tuesday and spent the next couple of days close to home trying to get things done around the house. 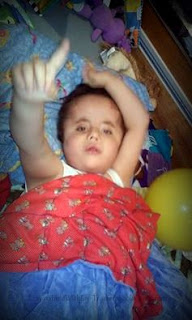 Some "excitement" that I hadn't mentioned gave us a bit of stress right before Aaron's hospital stay.  He had a microfiber pillow that we'd used off and on since he was tiny.  Well, Wednesday before he got sick, he got a hold of that with his teeth and ripped a hole in it.  Think thousands and thousands of tiny poppy seeds everywhere, except they're white.  Ever vacuumed your child?  I have.  That pillow is now gone and never coming back.

But his weighted blanket was also showing signs of wear and while those beads are bigger, they still have the potential to land in his airway.  So on Thursday, Michael and I made him a new one.  Michael cut up the old one so we could save the beads and I sewed up some fabric I found in the basement.  New blanket!  I don't know that I would have done it without the help.

He's also gotten good at undoing the velcro on his trach ties, so we made him a couple of beaded trach chains.  I'm hoping they also help get rid of the redness that he's dealt with around his neck.  They shouldn't chafe or hold in wetness nearly as much.  And the biggest part, he doesn't have the dexterity to undo them. 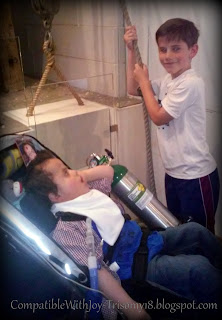 On Friday, we went up to Salt Lake.  Michael had fun hefting a stone with a pulley system similar to the ones they used to build the temples prior to modern equipment.  Aaron thought it was pretty cool what big brother was up to.    But the favorite part was the roof of the Conference Center.  It really is beautiful up there, doesn't even feel like you're on a rooftop.  It's four acres and has fountains and vegetation that you'd find across the Salt Lake Valley.  Michael pushed Aaron up and down the ramps and all over the place, giving me a much appreciated rest.

Tomorrow is back to school, and back to "normal life" (whatever that is).  Aaron has a post-op appointment from his first ear surgery and we'll consult with Dr. ENT about whether we need to push his next one out further since he was recently sick.  I think we probably will, but I guess we'll see what he thinks tomorrow. 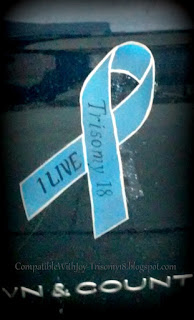 It may be a crazy life, but hey, it's ours.  We do what we can, when we can, the way we can.  And we try to appreciate the journey.

Posted by CompatibleWithJoy at 10:05 AM