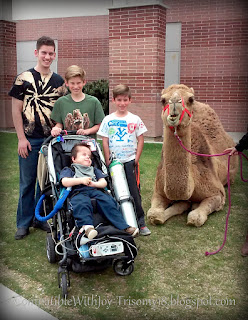 It's been a busy week, with a bit of an up and down ride.  You might have noticed, I actually wrote twice between last Sunday and today.  Sometimes those thoughts, feelings, emotions, whatever, just won't quiet down until you get them written out.  Kinda like untangling a tangle of yarn and making it straight.

But Aaron is doing much, much better.  I love the way the steroids calm the inflammation and let his lungs do their work.  We went from using albuterol, eight puffs (yeah, 8!) every two hours to 6 puffs prn, or as needed, basis.  I'm grateful for a pediatrician who is willing to look at his record ('cause ours was out of the office) and trust my instincts and call in the medicine he needs.  If I'd had to, I would have taken him to be looked at, but when you're doing a ten minute breathing treatment every two hours plus trying to keep everything else in life going, it makes it a bit more challenging to head out to a doctor's office.  Not to mention the very high likelihood of picking up yet another fun bug while there.

Then there was the trach plug.  I don't know about this 12-year-old of mine.  He's not really into the "holes in the body where there aren't usually holes" thing.  You know, the trach and g-tube.  He still gets grossed out pretty easily.  But he was the one who recognized that Aaron was plugged.  And a few months ago he was asking me about the pulse/ox machine and what would happen if it stopped working.  I thought he was asking out of curiosity.  It wasn't until I "missed" an answer and he prompted me that I realized I was being grilled on my ability to deal with situations.  He's a pretty smart cookie. 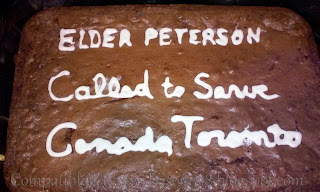 Friday evening Matthew opened his mission call.  He's going to the Canada Toronto Mission, speaking English and leaves on September 7th.  He is beyond excited.  I'd tried to get him to tell me where he wanted to go, but he hemmed and hawed, and didn't really give me anything.  Afterwards he admitted that he really hoped to go foreign, but speaking English.  Yep, he's pretty happy.

Yesterday, we had a chance to see Lone Peak's production of Joseph and the Amazing Technicolor Dreamcoat.    What fun!!  I claim Issachar as mine.  It was a riot!  I laughed and laughed.  If you want to see it, there are two more performances, Monday and Tuesday night.  And "Donald Trump" even makes a cameo appearance.  One bit part was played by "Cosmo the Camel."  Yep, they had a real, live camel on the stage, although one of his handlers said Cosmo thinks he's a dog, not a camel.  Afterwards, we just had to get a picture.  Aaron thought it was a riot.

Anyway, looking ahead, we had a beautiful sunny week, with lots of pollens last week.  Next week is forecast to be dreary, rainy, cold, with very little pollen.  I wish I could have the happy weather without the yucky pollens.  Oh, well.  I guess it's the whole "opposition in all things" situation.

AND on Tuesday, he should get his new wheelchair.  We're soooo excited.  This one has been great, and I don't know how many strollers last five years in almost constant use.  Not to mention all the equipment it's had to haul around.  But he's a bit bigger than he was five years ago.  About four times bigger.  And he'll be able to sit up straight in this one.  So yea for new equipment that will help him even more.

Onward and upward.  So fun.


And in today already walks tomorrow.
~Samuel Taylor Coleridge
Posted by CompatibleWithJoy at 10:00 AM