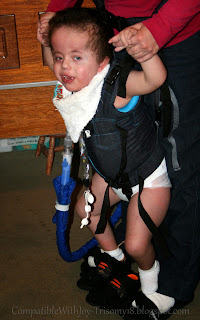 First off, for those who are concerned, we did get lab results from last nights ER visit back, and so far, nothing is positive.  Which certainly doesn't mean he's not sick.

His white blood count is pretty high so he's fighting something.  But he doesn't have pneumonia, or RSV, or our nemesis, rhino virus, or any other of a number of nasties they test for. 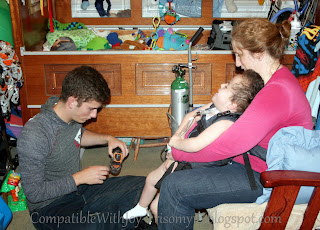 He's been home today, and we've continued to be really high on oxygen and pulling yuckies out of him.  But there's no IV, no hospital ventilator.  And best of all, we're HOME (and hoping to stay here).

But last week, I borrowed a contraption from a friend to try out.  It's called an "Upsee".  So tonight, when he was happy and doing better, David and I got it out.  I can tell from the pictures, we don't have it quite right.  He's not supposed to be tipping forward at all, and his pelvis should be farther forward.  So we'll have to adjust the harness some more.

But he did seem to have fun, even if he wasn't bearing weight much.  But a few times, I could feel his muscles turn on and him pushing down.  Which is HUGE. 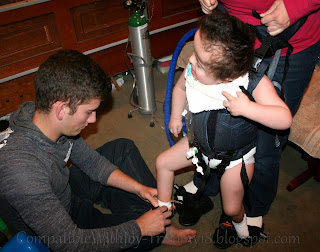 See, when that cute tiny baby pushes up and you support him, he's not just having fun.  He's also seating his femurs further into his hips. He's not only building muscle strength.  He's building bone mass, too. 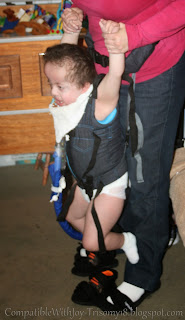 Yeah, all those things Aaron doesn't do.  If you try to pick him up and put his feet down, he thinks it's a funny game.  "Just how long can you hold me up?"

And kids like him have been known to break bones, just through normal range of motion movement, or dislocate hips, because they're simply not strong enough. 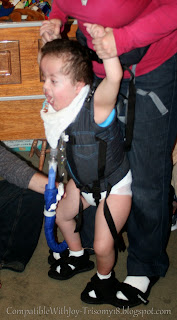 But I'm hoping that if we make it a game, and if he can move around, he'll develop an interest in using those legs.  And doing so won't only increase his bone and muscles in his legs, it'll increase his lung health, too. 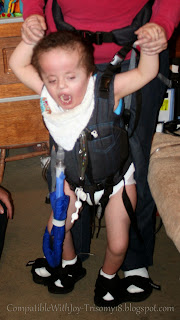 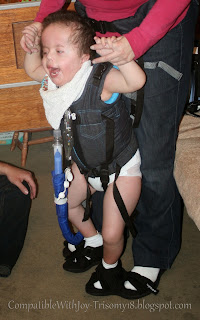 And frankly, the last time I got a look at his leg bones, well, they don't look like they'd support a sparrow.  So here's to helping our little sparrow soar more like an eagle.  The goal is to use it nightly for a couple of weeks and see if we can see progress.  And then I guess we'll go from there!