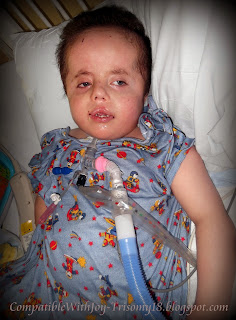 This kid is a mystery.  He's not playing by the rules, which is often a good thing, but kinda perplexing.

Here's what we know:

His second C.diff test, sent after we came up was negative.  That by itself is very strange. The test is incredibly accurate, but almost never ordered a second time.  Apparently it tests for C.diff DNA which stays in the system forever.  (Okay, maybe not forever, but certainly a very long time.)  Which means that he should have tested positive still from his first test.

His first test was positive, his second (and third 'cause they were so surprised at the results) were negative.

We do know he tends to get rid of things quickly.  Rhino is another one that can test positive for a long time, but while it does kick his hind end, he's also tests negative shortly after.

Anyway, the negative test, plus his fevers that lasted for a while, plus his exhaustion points to some kind of virus.

So they've sent yet another stool sample to test for some of the more common GI viruses to see if we can figure it out.

But this kiddo has a real sense of humor.  The nasty diapers have come fast and furious for most of our stay.  That is, until a doc decides they want a test.  Just after writing orders, he stops.  And we wait for a few hours each time.  Silly goose.

And then, 'cause he's not having enough fun yet, he throws us yet another curve ball.  He's been higher on his oxygen this whole time, like six liters, which we attributed to not feeling so hot.  This morning we were actually able to turn him down to five.  But tonight he figured that wasn't enough.  He's up on seven, and nearly ended up on eight.

His tummy has also blown up.   I mean, this poor kid looks like he's about eight months pregnant, and he's carrying high.  That or I could put a red suit on him and he could be Santa's double.

So we're going to use a Farrell feeding bag to let his tummy vent and get an abdominal x-ray.  I don't know if it will show us anything, but I'm not holding my breath for going home tomorrow.  He's just having too much fun here. And as always, he's in charge.

“I was not designed to be forced.
I will breathe after my own fashion.
Let us see who is the strongest.”
― Henry David Thoreau
Posted by CompatibleWithJoy at 7:48 PM